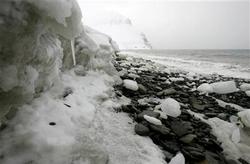 OSLO (Reuters) - Arctic storms could worsen because of global warming in a threat to possible new businesses such as oil and gas exploration, fisheries or shipping, a study showed on Wednesday.

"Large increases in the potential for extreme weather events were found along the entire southern rim of the Arctic Ocean, including the Barents, Bering and Beaufort Seas," according to the study of Arctic weather by scientists in Norway and Britain.

A shrinking of sea ice around the North Pole, which thawed to a record low in the summer of 2007, was likely to spawn more powerful storms that form only over open water and can cause hurricane-strength winds.

"The bad news is that as the sea ice retreats you open up a lot of new areas to this kind of extreme weather," said Erik Kolstad of the Bjerknes Center for Climate Change in Norway who wrote the study with a British Antarctic Survey researcher.

Potential new businesses in the North -- such as fisheries, oil and gas or shipping -- would be vulnerable to extremes caused by polar lows and arctic fronts, the researchers wrote in the journal Climate Dynamics.

Companies needed to factor in risks of worsening weather in planning, especially at times of year with least sea ice. "In autumn and early winter there will be polar lows in many new regions," Kolstad told Reuters.

He said that there would be less ice and more storms, for instance, in the eastern Barents Sea where Russian group Gazprom aims to develop the giant Shtokman gas field.

And potential new short-cut shipping routes between the Atlantic and the Pacific Oceans along the northern coast of Canada and Alaska or Russia could turn out to be stormier than expected.

He also said that more storms could increase erosion of coasts in the sparsely populated Arctic.

The report was based on data collected in the European Arctic and focused on Arctic change. It also suggested that more populated regions further south in Europe might benefit if storms tended northwards.

"This may prove to be good news for people along the coastlines of Norway, Iceland, the British Isles and Northern Europe in general," a statement said.

The U.N. Climate Panel says that a build-up of greenhouse gases in the atmosphere, mainly from burning fossil fuels, is stoking a warming that will cause more heatwaves, floods and droughts and rising sea levels.