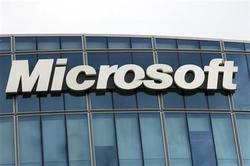 SEATTLE (Reuters) - Microsoft Corp said on Tuesday it will tweak its Word application to remove a feature judged to be a breach of patent, ensuring that it will be able to continue selling one of its most widely used programs.

The world's largest software company made the announcement shortly after a U.S. court of appeals upheld a $290 million jury verdict against it for infringing a patent held by a small Canadian software firm.

The court also affirmed an injunction that prevents Microsoft from selling versions of its Word program which contain the offending software, set to take effect January 11, 2010. Older versions of Word are not affected.

Microsoft said it is taking steps to remove the feature from Microsoft Word 2007 and Microsoft Office 2007 put on sale from that date.

The disputed patent feature relates to the use of XML, or extensible markup language, used for manipulating text, in the 2007 versions of Word. Microsoft described it on Tuesday as a "little-used feature".

However, Microsoft did not rule out further appeals.

"While we are moving quickly to address the injunction issue, we are also considering our legal options," said Kevin Kutz, a Microsoft spokesman. He said that could include a request for a rehearing by a full panel of judges at the appeals court, or a request for a review by the U.S. Supreme Court.

"I4i is especially pleased with the court's decision to uphold the injunction, an important step in protecting the property rights of small inventors," said Michel Vulpe, founder and co-inventor of i4i, in a statement.

END OF CASE IN SIGHT

The ruling -- by the United States Court of Appeals for the Federal Circuit, which handles many patent and trademark cases -- may signal the end-game of a long-running dispute between Microsoft and Toronto-based i4i Ltd.

On August 12, a jury in a federal U.S. district court in Texas ruled in favor of i4i against Microsoft, for infringing the XML patent in the 2003 and 2007 versions of Word.

The jury slapped more than $290 million in damages on Microsoft and the court granted i4i's motion for an injunction preventing Microsoft from selling versions of Word that contain the disputed patent technology.

That injunction was stayed while Microsoft appealed the case with the Court of Appeals, but will now go into effect on January 11.

The case is: i4i Limited Partnership and Infrastructures for Information Inc v. Microsoft Corp, an appeal from the U.S. District Court for the Eastern District of Texas in case no. 07-CV-113.