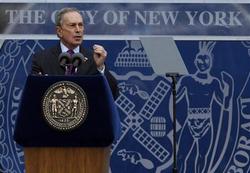 NEW YORK (Reuters) - New York City Mayor Michael Bloomberg pledged on Friday to promote a more open U.S. immigration policy during his third term, much as he made a campaign against illegal guns a hallmark of his second term.

"With leaders from across the country, we will assemble a bipartisan coalition to support President Obama's call for comprehensive immigration reform that honors our history, upholds our values, and promotes our economy," Bloomberg said upon being sworn in for his third term as mayor.

The White House has said it will aim for immigration reform in 2010, possibly including a path to citizenship for the 12 million immigrants who live in the country illegally.

Bloomberg, who considered running for president in 2008 as a political independent, raised his national profile by assembling a coalition of 500 U.S. mayors who banded together in a campaign against illegal guns.

On the hot-button issue of immigration, he favors more liberal laws on allowing immigrants into the country and legalizing those who lack documentation. That will draw opposition from advocates of tightening the border and deportation of illegal aliens.

"We're committing what I call national suicide," Bloomberg said on the NBC's "Meet the Press" last Sunday. "Somehow or other, after 9/11 we went from reaching out and trying to get the best and the brightest to come here, to trying to keep them out.

"In fact, we do the stupidest thing, we give them educations and then don't give them green cards."

Bloomberg, a longtime Democrat, switched to the Republican Party before his first mayoral campaign in 2001 and was re-elected as a Republican in 2005. He dropped party affiliation for his third campaign.

The mayor was able to run for a third term after engineering changes in election law to extend term limits from two terms to three. He has vowed not to seek a fourth term.