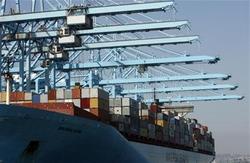 WASHINGTON (Reuters) - The U.S. trade deficit ballooned in November, as the price of imported oil jumped more than $5 per barrel and revived consumer and manufacturer demand pushed imports to their highest in nearly a year.

The gap grew 9.7 percent to $36.4 billion, the biggest deficit since January 2009, as trade continued bouncing back from a sharp fall caused by the global financial crisis, a Commerce Department report on Tuesday showed.

Analysts saw the data, which also showed exports rising for a seventh straight month, as more evidence the United States was emerging from its deepest recession since the 1930s.

"A lot of (the increase in the trade gap) had to do with oil prices," said James O'Sullivan, chief economist at MF Global in New York.

"You are still on track for a big surge in exports in the fourth quarter ... This is still consistent with the global economic recovery," he said.

For a graph charting the trade deficit and the percentage change in 2009 exports and imports versus 2008, please click on link.reuters.com/rad23h

Macroeconomic Advisers nudged its estimate of U.S. fourth-quarter economic growth slightly higher to 5.6 percent but others said the report was neutral or slightly negative.

But as the economy recovers, the trade gap could widen even further in 2010 and become a drag on growth, said Paul Dales, U.S. economist for Capital Economics in Toronto.

Another report showed U.S. chain store sales declined 3.0 percent the week ending January 9, from the prior week. But sales were 1.7 percent more than the same week last year.

U.S. consumer confidence also edged higher in January, a third report showed, but remained below levels signaling that consumers were optimistic about the future.

The average price for a barrel of imported oil rose to $72.54, the highest since October 2008, but volume was the lowest in more than 10 years.

The trade data had little impact on financial markets. U.S. stocks were lower, weighed down by disappointing earnings from Alcoa Inc and an earnings warning from Chevron Corp. For more, see.

U.S. exports of goods and services rose by a less-robust 0.9 percent in November to $138.2 billion, the highest in a year. The weak U.S. dollar has given exports a boost, but they are still well below the peak of $164.4 billion set in July 2008 before the global financial crisis sent trade plummeting.

The November tally included a record $7.3 billion to China, beating the record set just one month before.

Soybeans were the major cause of the increase in exports to China in both October and November, as U.S. suppliers stepped in to fill a shortage caused by drought in Argentina.

U.S. semiconductor exports to China were down $1.5 billion in the first 11 months of 2009, as the U.S. trade deficit for advanced technology goods hit a record in November.

Further gains in U.S. exports to China might be difficult because of what most economists agree is a significantly undervalued Chinese currency, which gives Chinese companies a big price advantage over foreign competitors.

But following that country's robust trade figures for December, the People's Bank of China moved on Tuesday to tighten monetary policy by boosting reserve requirements for commercial lenders.

That, plus a narrowing of the U.S. trade deficit with China in November, could take some of the immediate heat off Beijing to raise the value of its currency.

Meanwhile, the annual U.S. trade gap appears likely to fall below $400 billion in 2009 for first time since 2001. Through the end of November, the trade gap totaled $340.6 billion.