Why those fat thighs may help you live longer 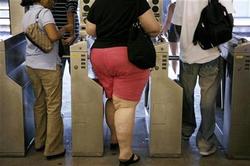 WASHINGTON (Reuters) - People with fat in their thighs and backsides may live longer because the fat traps harmful fatty particles and actively secretes helpful compounds, according to a report published on Tuesday.

Many studies have shown that people who accumulate fat around the abdomen and stomach are more likely to die of heart disease and other causes than bottom-heavy people, but the reasons are not clear.

This may be because several different mechanisms are involved, said Konstantinos Manolopoulos of Britain's University of Oxford.

"It is the protective role of lower body, that is, gluteofemoral fat, that is striking," Manolopoulos wrote in the International journal of Obesity.

"The protective properties of the lower-body fat depot have been confirmed in many studies," he added.

Fat on the bottom and thighs appears to store excess fatty acids, said Manolopoulos, who reviewed published scientific studies for his report.

Pear-shaped people also appear to have lower levels of compounds called inflammatory cytokines -- signaling chemicals involved in the body's response to infection that also can play a role in heart disease and diabetes when they are inappropriately active.

Fat on the legs may also absorb fats from the diet, keeping them from overwhelming the body when people overeat, Manolopoulos said.

Fat in the thighs may also be more stable, he said, with studies showing abdominal fat breaks down quickly during fasting or stress, releasing potentially harmful components from the fat.

"The exact regulatory mechanisms of fatty acid release and storage and their effect on short- and long-term fatty acid metabolism remain to be analyzed," Manolopoulos wrote.

Leg fat may also be better at producing hormones such as leptin, which are made by fat and affect appetite and metabolism -- although Manolopoulos said this is poorly understood.

Understanding all this could lead to better drugs for treating obesity and related disease such as diabetes and heart disease, Manolopoulos said.