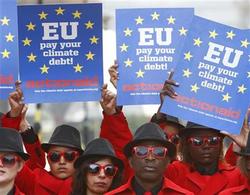 By Pete Harrison and Martin Roberts

BRUSSELS/MADRID (Reuters) - European Union environment ministers will seek a strategy for reviving global climate talks at a meeting in Spain this week, after a U.N. meeting in Copenhagen last month ended in failure.

A U.N. deadline is looming for countries to commit to emissions cuts as part of the U.N. process, and EU diplomats expect the bloc to make the lowest bid in its range of options.

The talks in the Danish capital last month ended with a bare-minimum agreement that fell far short of its original goal of forging a replacement for the climate-protecting Kyoto Protocol when it expires in 2012.

"Let's face it, it was not what we wanted," European Commission President Jose Manuel Barroso told a conference in Brussels on Tuesday.

The EU has pledged to cut emissions to 20 percent below 1990 levels over the next decade. But it also promised ahead of Copenhagen that the bloc would deepen those cuts to 30 percent if other industrialized countries took similar steps.

Low ambitions all round at Copenhagen mean that the EU is unlikely to take any unilateral step to 30 percent, diplomats say. Singapore has also opted for the lower of its options in the wake of Copenhagen.

Spain, which holds the EU's rotating presidency, will seek consensus at the meeting of environment ministers in Sevilla on Friday.

"One of the points to be discussed at the Council of Ministers is... whether we stay with 20 percent or of course take a quantitative leap based on comparable efforts," said Spanish environment minister Elena Espinosa.

"In Spain we have always defended it (the 30 percent target), but I would like to say that right now we must be prudent due to the role we play as EU presidency," she told Reuters in an interview on Wednesday.

Environmentalists argue that as a result of the economic crisis, European emissions have already fallen to within easy reach of the 20 percent cut.

"The target is actually so low that the EU would have to try very hard not to meet it," said Joris den Blanken of Greenpeace.

Ahead of the meeting in Sevilla, European ambassadors convened in Brussels on Wednesday to contemplate a Copenhagen agreement that will fail to keep climate change from entering dangerous territory.

"The offers known in Copenhagen did not add up to what is required by science in order to stay within the 2 degrees (Celsius) objective," said a document for the Brussels meeting.

The pledges that were on the table at Copenhagen would lead to around 3.5 degrees of climate warming by the year 2100, said climate scientist Stefan Rahmstorf of Germany's Potsdam Institute for Climate Impact Research.

(Reporting by Pete Harrison in Brussels and Martin Roberts in Madrid, additional reporting by Paul Taylor)