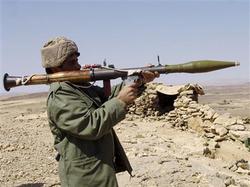 U.S. Special Forces, the CIA and the National Security Agency have played an important part in the growing covert assistance program aimed at helping Yemeni forces track down and kill the leaders of al Qaeda in the Arabian Peninsula (AQAP).

The Pentagon and the CIA have sought to keep their roles quiet, in part to avert a public backlash against the Yemeni government, which, besides al Qaeda, is battling Shi'ite rebels in the North and faces separatist sentiment in the South.

The covert program was launched before a Nigerian man allegedly trained by AQAP attempted to blow up a U.S. airliner bound for Detroit on Christmas Day, but it has since picked up pace with a series of high-profile raids by Yemeni war planes and ground forces.

The Pentagon and the White House had no immediate comment on a Washington Post report that President Barack Obama had personally approved the joint operations, which began six weeks ago and killed six regional al Qaeda leaders.

But Pentagon spokesman Geoff Morrell praised Yemen's "aggressive and forceful response" to the al Qaeda threat, and said Washington was supportive -- "be it financially, be it training, be it advice" -- of Yemen's efforts.

U.S. Special Forces have not taken part directly in attacks in Yemen, nor have U.S. intelligence agencies provided the Yemenis with specific "target lists," officials said.

"It is truly Yemeni-led," a U.S. military official said. "We are sharing information with them to allow their strikes to be more effective."

The military official declined to discuss the extent of U.S. assistance, but other officials said it included images from U.S. satellites and other surveillance aircraft, as well as communication and telephone intercepts to help Yemen prepare for strikes and identify potential targets.

U.S. officials say satellite and signal intelligence is a critical component of the campaign against al Qaeda in the Arabian Peninsula because the Yemeni government has few capabilities of its own, and holds little sway outside major population centers, leaving large tracts of territory open to al Qaeda and other groups.

Annual U.S. State Department reports on human rights in Yemen have highlighted allegations of torture by Interior Ministry forces, some of which play an increasingly important role in tracking and fighting al Qaeda leaders there.

General David Petraeus, head of U.S. Central Command, has proposed more than doubling military assistance for Yemen to about $150 million, but it is unclear how much covert assistance will be provided on top of that.