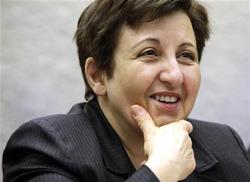 Ebadi said the rights situation was deteriorating rapidly and accused security forces of violently suppressing peaceful protests against what the opposition says was the fraudulent re-election of President Mahmoud Ahmadinejad last year.

"I am against economic sanctions and military attacks. However, if the Iranian government continues to violate human rights and ignore people's demands, then I start thinking about political sanctions," Ebadi told a human rights forum on Iran.

"Do not sell weapons to the Iranian government," she added.

Ebadi, speaking to Reuters afterwards, made clear that political sanctions should be imposed "the sooner the better, because human rights violations in Iran are growing every day."

"In that way, it is not a total severing of ties but you manage to demonstrate to the Iranian people that human rights is respected and considered (as being) of the utmost importance by you," she said through an interpreter.

"Do not give visas to any government officials or any delegations representing the government," she told Reuters.

The Islamic state is facing growing Western calls for a fourth round of targeted U.N. sanctions after it stepped up enrichment of uranium the West suspects is intended for nuclear weapons. Tehran says it plans only civilian uses.

Ebadi said existing economic sanctions hurt ordinary Iranians rather than the elite. "Sadly, thanks to the support of China and Russia, the Iranian government has a way of circumventing these sanctions. Therefore such economic sanctions will only affect the people.

"Wider economic sanctions only hurt innocent people and we are against that," she said.

Iranian authorities say last year's presidential poll was fair. Hundreds of thousands of government supporters turned out on Thursday to mark the anniversary of the Islamic revolution.

Human rights defenders, journalists and lawyers have been arrested during eight months of protests and more than 50 people from the minority Baha'i faith are in prison, Ebadi said.

The Iranian government controls Internet and phone access and jams western broadcasts to cut off activists, said Iran's most famous human rights lawyer, whose influence in the country of 70 million is seen as limited.

Ebadi was addressing a preliminary forum for Monday's U.N. Human Rights Council session, when Iran will be in the dock in a periodic examination of member states' records.

Amnesty International said on Friday at least 5,000 activists and their families had been arrested in the political turmoil. Many had been subjected to torture or ill-treatment.

"Security forces, especially the Basij militia, beat protesters, use tear gas in confined space and use live ammunition. All this is done with impunity," said Esteban Beltran of Amnesty.

He denounced "flogging, blinding, and amputations" of prisoners and executions of people who had committed crimes as juveniles.

U.S. and other Western diplomats queued overnight on Thursday to reserve a spot to address the U.N. forum, fearing Iran's allies would book up places first thing on Friday morning, diplomats said. In all, 60 delegations will speak.

"We expect it to be a fairly heated debate. Everything will depend on how Iran reacts," one Western diplomat told Reuters.