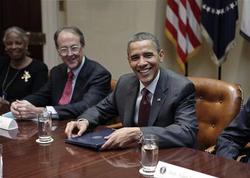 By Donna Smith and Caren Bohan

WASHINGTON (Reuters) - President Barack Obama on Tuesday told a commission that will suggest ways to rein in soaring U.S. budget deficits to consider every possible remedy to put the country on a path toward fiscal health.

Obama said the 18-member bipartisan National Commission on Fiscal Responsibility, which held its first meeting, would be free to work without limitations. He declined to discuss what revenue increases or spending cuts the panel should consider.

"It's important that we not restrict the review or the recommendations that this commission comes up with in any way," Obama said. "Everything has to be on the table."

The U.S. deficit was $1.4 trillion in 2009, nearly 10 percent of the overall economy, and it could be higher this year. Public worry over the deficit and government spending is expected to be a big factor in elections in November when Republicans hope to seize back control of Congress from Obama's Democrats.

Longer term, the retiring baby boom generation will strain the Social Security retirement program and the Medicare health insurance program for the elderly and disabled, putting even more pressure on government spending.

Obama spoke in the Rose Garden with commission co-chairmen -- Erskine Bowles, a Democrat who was White House chief of staff under President Bill Clinton, and former Republican Senator Alan Simpson -- ahead of the panel's public meeting. The commission has been asked to make recommendations by December 1, just weeks after the elections.

Obama spoke as international investors fretted over a worsening debt crisis in Greece, which last week asked for financial aid from fellow European Union nations and the International Monetary Fund.

Standard and Poor's on Tuesday cut its rating on Greek debt again and lowered its credit rating for heavily indebted Portugal, shaking financial markets in both the United States and Europe.

U.S. Federal Reserve Chairman Ben Bernanke told the panel that the U.S. fiscal path was unsustainable and said "our nation should soon put in place a credible plan for reducing deficits to sustainable levels over time."

The U.S. budget deficit has been fueled in part by the global financial crisis that hit just before Obama took office last year and by his efforts, including a $787 billion stimulus package, to reinvigorate the U.S. economy.

White House Budget Director Peter Orszag said in an interview with Reuters that the panel will help policymakers get ahead of any potential market reaction to U.S. fiscal woes.

"I think the goal is to get ahead of an adverse financial market reaction," Orszag said.

"We have just gone through a highly unusual period in which private borrowing collapsed," he added. "That's not going to persist."

In earlier comments to the commission, Orszag warned that out-of-control budget deficits could cause investors to lose confidence in a government's credit worthiness.

The U.S. debt has topped $12 trillion, and some analysts fear it could double in the next decade or so.

Much of the U.S. debt is held by other countries including China and Senate Finance Committee Chairman Max Baucus, a Democrat, said the size of foreign holdings of U.S. debt could put the U.S. economy at risk.

"If other nations decide at some point that it's too risky to hold U.S. treasury securities and start to sell them, it could drive interest rates through the roof, and that could lead to recession," said Baucus, a commission member.

Debate has already erupted over options Obama's panel might consider.

Liberals fear Social Security and other social safety net programs could be on the chopping block.

Conservatives worry the commission is a stalking horse for a push to increase taxes. They have vowed to head off any consideration of a European-style value-added tax, an idea that former U.S. Federal Reserve Chairman Paul Volcker, an outside adviser to Obama, has said is worth looking at.

In his interview with Reuters, Orszag declined to directly comment on the possibility of a U.S. value-added tax.

But he added that "there are lots of advantages and disadvantages of many different approaches to taxation."