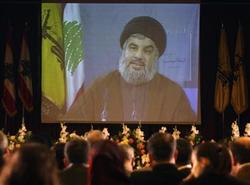 Nasrallah, in an interview with Kuwait's al-Rai television broadcast on Thursday, said the claims were an attempt to "intimidate" the armed Lebanese political organization, but he did not see a repeat of the 2006 Israeli-Hezbollah war on the horizon.

"I cannot say that it is close. Myself and brothers in Hezbollah see that all this intimidation does not hide behind it a war. On the contrary, if there was silence and quietness, then everyone must be vigilant," he said.

"But when you see all this American and Israeli noise, this means they want to use this noise to achieve political, psychological and certain security advantages without resorting to the step of war.

"Today it's Scuds, yesterday other kinds of rockets ... the aim is one, and that is to intimidate Lebanon, to intimidate Syria and to put pressure on Lebanon, Syria, the resistance movement and the Lebanese and Syrian people," Nasrallah said.

"Regardless of whether Syria gave Hezbollah this type of rockets ... of course Syria denied, and Hezbollah as usual does not comment."

U.S. and Israeli defense ministers have accused Syria of arming Hezbollah with increasingly powerful missiles. Israel has said it does not intend to provoke a conflict over the buildup.

U.S. intelligence and defense officials have cast doubt on Israeli allegations that Scuds have reached Lebanon.