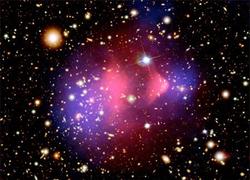 GENEVA (Reuters) - Scientists working on the Big Bang project probing the secrets of the cosmos said on Wednesday their giant particle collider is on course to make unexpected discoveries about the origins and makeup of the universe.

Reporting on the progress of the experiment two months into its initial high-power phase, scientists at the CERN research center said the $10 billion machine was rapidly proving its capacity to advance the frontiers of physics.

"We now can envisage turning up exotica like large extra dimensions, string balls and heavy slow-charged particles," said Oliver Buchmueller, director of one of the 6 detectors monitoring collisions in the subterranean tunnel of the Large Hadron Collider, or LHC.

He told a meeting at CERN, the European Center for Nuclear Research on the Swiss-French border near Geneva, that such discoveries would complement parallel efforts to find the Higgs boson particle, thought to explain the existence of mass in the universe, and find evidence of super-symmetrical particles, which could give clues about the existence of dark matter.

String theory proposes that the basic ingredients of the universe are tiny strings of matter which vibrate in a space-time continuum of 10 dimensions.

Steve Myers, CERN's director of accelerators and technology, said the LHC had been all but glitch-free since particle collisions at a combined force of 7 tera, or 7 million million, electron volts began on March 30.

"I keep thinking: this is going too well," said Myers. "We have to keep watching to keep the machine safe. The last thing we want is another shutdown," he added in a reference to a coolant leak that halted an earlier LHC startup at a lesser power in September 2008.

The potential advances listed by Buchmuller, and echoed by other scientists at the meeting called to review how the project was functioning, are prime topics for physicists and cosmologists seeking to understand how the universe works.

The CERN collisions, some 200 million since March 30, in the 27 km (16.8 mile) LHC tunnel are recreating on a miniature scale what happened within nano-seconds of the Big Bang 13.7 billion years ago that created the galaxies, stars -- and life.

Six ultra-sophisticated detectors around the LHC record how the particles behave after being smashed together, transmitting the data for analysis to laboratories at CERN and in other research centres around the globe.

Already the machine has identified many elements included in the so-called Standard Model that physicists created during the 20th century for how they believed the cosmos should and does work, said CERN scientist Andrei Golutvin.

Among these, he told Reuters, was a particle known as a "beauty quark" -- sighted already in other colliders at CERN and around the world -- that decays in nano-seconds after traveling no more than 2 millimeters in CERN's LHCb detector.

"To me, it is a miracle that the LHC is detecting the particles we expected from the Standard Model so early in this experiment. It shows just how well the LHC is functioning," said Golutvin, spokesman for the LHCb.