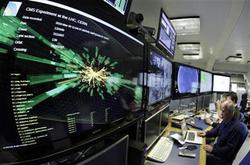 GENEVA (Reuters) - Research scientists announced on Monday they had identified the missing piece of a major puzzle involving the make-up of the universe by observing a neutrino particle change from one type to another.

The CERN physics research center near Geneva, relaying the announcement from the Gran Sasso laboratory in central Italy, said the breakthrough was a major boost for its own LHC particle collider programme to unveil key secrets of the cosmos.

According to physicists at Gran Sasso, after three years of monitoring multiple billions of muon neutrinos beamed to them through the earth from CERN 730 kms (456 miles) away, they had spotted one that had turned into a tau neutrino.

Behind that scientific terminology lies the long-sought proof that the three varieties of neutrinos -- sub-atomic particles that with others form the universe's basic elements -- can switch appearance, like the chameleon lizard.

The discovery is important, scientists say, because it helps explain why neutrinos arrive at earth from the sun in apparently far smaller numbers than they should under the Standard Model of physics that has held sway for some 80 years.

The fact that neutrinos are now proven to switch identities -- as posited by two Moscow scientists in the late 1960s based on earlier work by a U.S. physicist -- suggests that other types of neutrinos could exist but slip detection.

In its turn, specialists say, this could help shed light on what is the dark matter that makes up about a quarter of the universe alongside the some 5 percent that is observable and the remaining 70 percent invisible "dark energy."

"This is really exciting because it shows that there are things beyond the Standard Model," said James Gillies, spokesman for CERN -- the European Organization for Nuclear Research on the border between Switzerland and France.

The search for concrete evidence of dark matter and of what it might be is part of the work of CERN's LHC, or Large Hardon Collider, the world's biggest scientific machine that began operation near full force at the end of March.

But the beaming of muon neutrinos to the Italian center is not part of the LHC experiment. The beam is directed south under the Alps from another, smaller, CERN particle accelerator.

CERN quoted Lucia Votano, director of the Gran Sasso laboratories near the town of L'Aquila 112 kms south of Rome that was hit by a devastating earthquake in April last year, as saying that its work had achieved its first goal.

Scientists there were confident that the detection in the centre's OPERA experiment of a tau neutrino would be followed by others showing that neutrinos can change, she said.

Work on the behavior of neutrinos has already brought Nobel prizes to late U.S. scientist Ray Davies, who first recorded in the 1960s that fewer were coming from the sun than current theories of the universe predicted.

He shared the prize in 2002, at the age of 87 and 4 years before his death, with fellow U.S. researcher Ricardo Giacconi and Japanese physicist Masatoshi Koshiba for the contribution to astrophysics.