Foxconn to up wages again at suicide-hit China plant 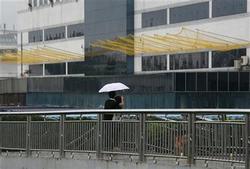 TAIPEI (Reuters) - iPhone maker Foxconn (2038.HK: Quote, Profile, Research, Stock Buzz) has offered workers at its Shenzhen manufacturing hub in China a 66 percent performance-based pay rise as it tries to deal with the fallout from a spate suicides there.

Foxconn, owned by Taiwan contract electronics maker Hon Hai Precision Industry (2317.TW: Quote, Profile, Research, Stock Buzz), said on Sunday production line workers would be able to earn 2,000 yuan a month if they pass a three-month performance review. It did not give details of the evaluation process.

The latest hike, to take effect as early as October 1, comes on top of a 30 percent across the board rise in the cash part of wages announced last week and means wages will be more than double since employee suicides became a major issue last month. Before last week's rise, workers earned 900 yuan a month.

"This wage increase has been instituted to safeguard the dignity of workers, accelerate economic transformation, support Foxconn's long-term objective of continued evolution from a manufacturing leader to a technology leader, and to rally and sustain the best of our workforce," said Foxconn founder and Chairman Terry Gou in a statement.

"We are working diligently to ensure that our workplace standards and remuneration not only continue to meet the rapidly changing needs of our employees, but that they are best in class."

A total of 10 workers have committed suicide at the company's base in Longhua, southern China this year. They were all young migrant workers, among the millions of people who leave the poor hinterlands of China for the boom towns of the south and east coastal areas.

Another worker died late in May from what his family said was overwork, a claim the company denied.

The string of deaths have focused attention on working conditions in a region experiencing growing labor unrest and have triggered investigations by Apple (AAPL.O: Quote, Profile, Research, Stock Buzz) and other big Foxconn clients, including Dell Inc DELL.O.

Apple CEO Steve Jobs called recent suicides at the plant troubling but said last week the site was not a sweatshop.

Foxconn said wage increases for supervisors would be announced by August 1 and wage rises for plants elsewhere in China will be announced starting on July 1.

It added that while overtime work was always voluntary, the wage increase would make working overtime a choice rather than a necessity for some employees.