BP cuts dividend and capex to pay for oil spill 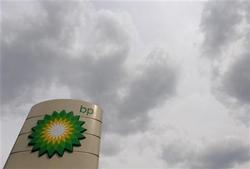 LONDON (Reuters) - Oil giant BP said it would not pay three quarters of dividends, significantly reduce its investment program and sell $10 billion of assets to fund a planned $20 billion fund to pay for its Gulf of Mexico oil spill.

The commitments, outlined in a statement on Wednesday, are harsher penalties than most investors had expected and follow BP chairman Carl-Henric Svanberg's meeting with President Obama on Wednesday.

BP said it would cancel the previously declared first-quarter dividend scheduled for payment on June 21, and said no interim dividends will be declared for the second and third quarters of 2010. The payouts had been expected to be about $2.6 billion per quarter, in line with recent quarters.

Investors had expected the suspension of BP's dividend, or payment in shares for a couple of quarters, and had not expected BP to be forced to sell assets and cut investment by 10 percent in 2010 and 2011 -- moves that will curb BP's growth.

When quizzed by analysts on a conference call about what BP had received in return for such major concessions, Chief Financial Officer Byron Grote said the agreement reflected the rising anger toward BP.

"(It) will certainly allow us to progress our business more effectively than would have otherwise been the case," he said.

The decisions to cut investment and sell assets come despite the fact BP is committed to putting only $5 billion this year into the new fund, which will be administered by a body independent from BP.

The company said it would generate over $30 billion from operations this year, while it also has massive credit lines.

In 2011 and beyond, BP will make payments into the fund of $1.25 billion per quarter, until the fund amounts to $20 billion.

Grote said the $20 billion was not a cap on BP's liability, but that he expected it would cover the bulk of claims.

Until $20 billion has been added to the fund, BP's commitments will be assured by the setting aside of U.S. assets with a value of $20 billion, the company said.