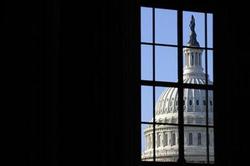 WASHINGTON (Reuters) - Alternative energy investment prospects have shriveled in the United States after the U.S. Senate was unable to break a deadlock over tackling global warming, a Deutsche Bank official said.

"You just throw your hands up and say ... we're going to take our money elsewhere," said Kevin Parker in an interview with Reuters.

Amid so much political uncertainty in the United States, Parker said Deutsche Bank will focus its "green" investment dollars more and more on opportunities in China and Western Europe, where it sees governments providing a more positive environment.

Besides failing to set a policy dealing with climate change, Parker also complained that on-again, off-again tax incentives for renewable energy contributes to the poor outlook for investment in the United States.

While much of the world has placed a priority on reducing carbon dioxide pollution that scientists blame for global warming, the U.S. Congress has been stuck in a furious debate over whether man-made global warming really is a problem worth addressing and whether consumers should be saddled with the costs of switching to cleaner-burning but more expensive fuels -- a particularly tough sell during hard economic times.

Over a year ago, the House of Representatives narrowly passed legislation imposing a 17 percent reduction in U.S. greenhouse gas emissions by 2020 from 2005 levels.

President Barack Obama pledged that 17 percent cut to an international conference on global warming that met in Copenhagen in December.

But he made it contingent on the Senate also going along with legislation that would put an ever-escalating price on carbon-emitting fuels like oil and coal so that nascent wind, solar, biomass and other energy sources would attract more investment.

And that's where things have broken down, as the deeply divided Senate, especially during this election year, has refused to bring a bill up for debate.

Obama's climate control advisers say he still stands behind the 17 percent goal. But it would be hard to achieve without legislation, let alone the deeper 2050 cuts scientists say are necessary to prevent harsher droughts, floods and storms.

Without final action by Congress, the Obama administration will be left with its Environmental Protection Agency imposing carbon pollution cuts through regulations that already are tied up in lawsuits. Meanwhile, some in Congress are pushing to either kill off the EPA rules or postpone them for a few years.

U.S. backers of climate control legislation, including Senator John Kerry, fear all this uncertainty will only encourage investors to look elsewhere, giving countries like China a further boost in job-creating green industries.

"We've said that we're going to put our capital in places where we can get our arms around regulatory risk," Parker said. And what that required, he said, were government policies that provide "transparency, longevity and certainty."

For Deutsche Bank, which has erected a "carbon counter" in Manhattan to tick off the level of greenhouse gases in the atmosphere, that means concentrating on investment opportunities in Germany, Italy, Spain and China, according to Parker.

"The U.S. hasn't even entered the race yet" for a clean-energy economy, Parker said. Indicative of that was the fact that of the nearly $7 billion in green investments his fund currently juggles, only about $45 million originated in the United States, according to Deutsche Bank.