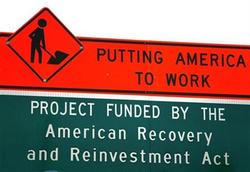 WASHINGTON (Reuters) - The massive U.S. stimulus package put millions of people to work and boosted national output by hundreds of billions of dollars in the second quarter, the nonpartisan Congressional Budget Office said on Tuesday.

CBO's latest estimate indicates that the stimulus effort, which remains a political hot potato ahead of the November congressional elections, may have prevented the sluggish U.S. economy from contracting between April and June.

During that time the economy was growing at an anemic pace.

Gross domestic product rose just 0.6 percent during that period, according to preliminary Commerce Department data which economists expect will be revised sharply lower when new figures are released on Friday.

The massive package of tax cuts, construction spending and enhanced safety-net benefits was passed in February 2009 in the midst of the deepest recession since the 1930s.

It raised employment by between 1.4 million and 3.3 million jobs during the second quarter of this year, CBO estimated.

Measured another way, CBO said the stimulus increased the number of full-time equivalent jobs by up to 4.8 million, as part-time workers shifted to full-time work or employers offered more overtime work.

CBO said the package, officially known as the American Recovery and Reinvestment Act, would cost $814 billion, down from its previous estimate of $862 billion. The lower figure was thanks largely to health-care subsidies that cost less than anticipated. CBO initially estimated the bill would worsen budget deficits by $787 billion.

Other than that, the estimate varies only slightly from the budget office's forecast released in May.

With both the House of Representatives and the Senate up for grabs in November, Democrats hope voters will give them credit for breathing some life into the economy, which had begun to weaken while Republican George W. Bush was still president.

"The Recovery Act is working to rescue the economy from eight years of failed economic policy and rebuild it even stronger than before," Vice President Joe Biden said in a prepared statement. "It's impossible for even the most cynical, bent-on-rooting-for-failure critics to deny."

Republicans, who almost universally opposed the stimulus, have criticized it as wasteful and ineffective.

Some 67 percent of those surveyed in a Reuters/Ipsos poll last month said Obama is not focusing enough on job creation. Voters in that survey said the economy and jobs are the most pressing issues facing the country.

CBO said it expects the effects of the stimulus to gradually diminish over the remainder of the year.