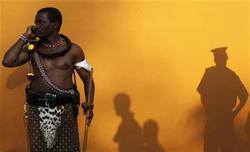 GENEVA (Reuters) - Mobile phones -- spreading faster than any other information technology -- can improve the livelihoods of the poorest people in developing countries, a United Nations report released on Thursday said.

But governments must design responsive policies to ensure that the benefits reach the broadest number in the most effective way, the United Nations Conference on Trade and Development said in its Information Economy Report.

Mobile phone subscriptions will reach five billion this year -- almost one per person on the planet, UNCTAD Secretary-General Supachai Panitchpakdi told a news conference on the report.

Penetration in developed countries is over 100 percent, with many people having more than one phone or subscription.

In developing countries, the subscription rate is now 58 per 100 people, and rising rapidly, with the rate in the poorest Least Developed Countries (LDCs) up at 25 from only 2 per 100 a few years ago, UNCTAD figures show.

The potential of mobile phones in developing countries has been highlighted by the efforts of Russia's Vimpelcom to tie up with the telecoms assets of Egypt's Orascom, which include Algerian operator Djezzy that Algiers wants to nationalize.

UNCTAD said the economic benefits of mobile phones, whose use in LDCs far outstrips technologies such as the Internet or fixed-line phones, go well beyond access to information.

Mobiles have spawned a wealth of micro-enterprises, offering work to people with little education and few resources. Examples are selling airtime on the streets and refurbishing handsets.

The key to successful use of mobile is affordability, the report argues, a lesson not learnt by many African states. "India has shown us the way in making it as cheap as possible so everyone can gain access to this kind of equipment," Supachai said.

Governments need to monitor how poor people are using mobile phones and design policies to build on that. And they must ensure that poor people can use their phones -- at the end of 2008 almost half the rural population in LDCs were not covered by mobile signals.