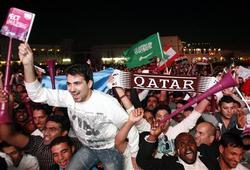 ZURICH (Reuters) - FIFA gave its ultimate recognition to emerging markets on Thursday by awarding the 2018 and 2022 editions of the prestigious and lucrative World Cup soccer finals to Russia and Qatar, both new hosts.

Russia won the right to put on the 2018 World Cup, the first time it will have been staged in Eastern Europe after 10 editions in the western half of the continent.

Qatar, which has never qualified for the World Cup finals, will stage the 2022 tournament, a first both for the Middle East and for an Arab country. It will also be the smallest nation ever to host the World Cup.

Both new hosts are major energy producers and both had planned larger and costlier investment in infrastructure and new stadiums than all their respective rivals.

FIFA President Sepp Blatter, who announced the winners after a vote of his executive committee in the Swiss financial capital, said: "We go to new lands.

"Never has the World Cup been in Russia and Eastern Europe, and the Middle East and Arabic world have been waiting for a long time so I'm a happy president when we talk about the development of football."

Russia's prime minister Vladimir Putin flew in to Zurich immediately after the winning vote and held a news conference before going on to meet and thank Blatter and FIFA.

"We are honored to win in this tough and fair fight," he told reporters. "Thank you for supporting Russia. Together let us make sure football supports fair play, tolerance, honor."

Putin said he had made the right decision to stay away from Zurich for Russia's final presentation so FIFA executives could make their choice in peace after corruption allegations against some executive committee members in the British media.

"I did this out of respect," he said. "There was unacceptable campaigning that was deployed for the World Cup in 2018. People were accused of corruption. They were accused without any grounds, without any reasons, no justifications."

Soccer's governing body's executive committee voted for the two winning bids after a fierce lobbying campaign which saw world political leaders and top sports personalities gather in Zurich to press their case for one of the biggest prizes in global sport.

Russia defeated the challenge of three other European bidders, England and the joint bids of Netherlands/Belgium and Spain/Portugal.

Qatar took the honors for 2022 over rivals Australia, Japan, South Korea and the United States.

They committed in their bid document to FIFA building nine new stadiums and renovating three existing grounds at a cost of around $3 billion.

Russia won on the second round of voting in which an absolute majority was required. England, motherland of soccer, was humiliated, going out in the first round with just two votes despite three days of lobbying in Zurich by British Prime Minister David Cameron.

Observers said they may have suffered from an adverse reaction by FIFA to the corruption allegations and to Wednesday's serious outbreak of soccer hooliganism at a cup match in Birmingham.

The Russians, leading with nine votes on the first ballot, obtained 13 votes on the second round, ahead of Spain/Portugal on seven and Netherlands/Belgium with just two.

Qatar led in the 2022 ballot on each of the four rounds, obtaining 14 votes against eight to the U.S. in the final round.

"I think it was the wrong decision," U.S. President Barack Obama told reporters.

Australia made a first round exit with just one vote and Japan and South Korea fell out in turn on the next two rounds.

(Editing by Kevin Fylan. To query or comment on this story email sportsfeedback@thomsonreuters.com)