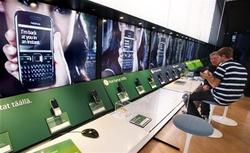 HELSINKI (Reuters) - Nokia has delayed the rollout of its next top-of-the-range model to next year, another blow to the cellphone maker's plans to regain ground lost to Apple and Google in the smartphone market.

Nokia said it would postpone shipping the E7 model from this month to early next year. The E7 is similar to its N8 flagship model but has a full slideout keyboard.

"To ensure the best possible user experience on the E7 we have decided to begin shipping in early 2011," a spokesman for Nokia said on Tuesday.

The N8 was also delayed this year and, after launch, Nokia admitted some of the phones had power problems.

The N8 and E7 are flagship models for the new version of Nokia's Symbian software.

"This rounds out a miserable year for Nokia with regards to getting the new generation of Symbian phones out the door," said Ben Wood, research director at British consultancy CCS Insight.

Hannu Rauhala, analyst at Pohjola Bank in Helsinki, said expectations for the E7 have likely not been very high and the news further dampens expectations. "Uncertainty over the future of high-end models is growing," said Rauhala.

A weak offering of smartphones and software problems were seen as the main reasons for Nokia replacing chief executive Olli-Pekka Kallasvuo with Stephen Elop from Microsoft in September.