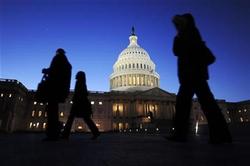 WASHINGTON (Reuters) - The Senate headed for a last-minute showdown over spending as Republicans vowed on Wednesday to block a bill laden with pet projects that would fund the entire U.S. government.

With prospects uncertain for the $1.1 trillion measure, lawmakers planned for a vote on Saturday, hours before funding expires for everything from nuclear submarines to national parks.

Senate Republicans blasted the bill as a crude Democratic attempt to push through funding for pet projects known as earmarks before the new year, when Republicans will wield greater clout in Washington.

Republicans also objected to the $8.3 billion worth of pet spending projects tucked into the bill, even though they personally requested many of the earmarks. Many voters view earmarks as a prime example of wasteful government spending, and Republicans vowed to renounce them after winning big in the November 2 congressional elections.

"We will reject any earmarks requested by us or anyone else because that's what the American people have said they want," said Republican Senator John Cornyn.

He has sponsored 51 earmarks worth $93.5 million in the bill, according to the watchdog group Taxpayers for Common Sense.

Republican Senator Jim DeMint, one of the chamber's most uncompromising conservatives, has threatened to require clerks to read the entire 1,924-page bill out loud, a process which could take days.

It is unclear whether Cornyn will be able to muster enough votes to block the bill. Republican Senator Bob Bennett told Reuters he will back the measure, and four others said they remain undecided.

The House of Representatives passed a substantially different funding bill last week. The two measures would have to be reconciled before current spending expires on Saturday at midnight EST (0500 GMT).

A Senate Democratic aide said he was "cautiously optimistic" that they will have the support they need to pass the bill.

The bill reflects the changed political climate in Washington as voters have become increasingly opposed to the aggressive spending measures Democrats have taken over the past few years to fight the deepest economic downturn since the Great Depression.

The bill would provide $29 billion less than Obama requested to fund the government until the next fiscal year begins in October 2011.

It would freeze the salaries of nondefense federal employees through 2013 and prohibit the administration from bringing terrorism suspects held at the Guantanamo Bay prison camp in Cuba to the United States to face criminal trial.

The measure includes big budget increases for financial regulators to carry out their increased responsibilities under the Dodd-Frank reform of Wall Street, and $1 billion to begin implementing Obama's signature healthcare overhaul.

It includes $450 million to continue work on a second engine for the F-35 fighter plane, which the Pentagon has tried to kill for several years. Nevertheless, Defense Secretary Robert Gates said he supported the bill.

Congress is supposed to pass 12 individual spending bills to fund the government before the start of the fiscal year each October, but rarely manages to do so.

Congress has kept the government running on an extension of last year's budget, an approach that prevents agencies from doling out new research grants and launching other programs.

The Senate spending bill combines those 12 bills into one unwieldy package. Still, it would represent an improvement over the House version. That bill would essentially extend last year's budget through the rest of the current fiscal year, an approach that would make it difficult to shift funding to high-priority areas.

Republicans in both the House and the Senate want Congress to extend last year's budget only for a few months. That would give them a greater chance to enact the deep spending cuts they have promised.