For many U.S. troops, a last Christmas in Iraq 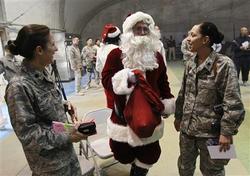 JOINT BASE BALAD, Iraq (Reuters) - Colonel Lance Kittleson is looking forward to spending Christmas with his family next year as U.S. troops withdraw from Iraq 7-1/2 years after the invasion that toppled Sunni dictator Saddam Hussein.

Many of the U.S. troops left in Iraq can't wait to get home.

"Back in 2003, we were extended repeatedly and we didn't know if we would ever get home. Now we know we're going home in a certain length of time," Kittleson, a chaplain, said during a candlelight vigil with other soldiers to mark Christmas.

"It's time for us to get home. We've been here long enough. The Iraqis are doing their job," he added.

The United States officially ended combat in Iraq at the end of August and the just under 50,000 troops left are supporting Iraqi security forces in an advisory and assistance role.

All troops are to be fully withdrawn by the end of 2011 under a security agreement between the two countries.

At Joint Base Balad in Iraq's northern Salahuddin province, many U.S. soldiers added a touch of color to their uniforms on Saturday, donning Santa Claus hats and reindeer antlers to join Christians around the world in celebrating Christmas.

American troops in Iraq numbered about 170,000 at the peak, but tens of thousands have already gone home. The number at Joint Base Balad, one of the largest U.S. bases, has been whittled down to around 7,000.

While the numbers are expected to fall further in coming months, Lieutenant General Jack Stultz, head of the U.S. army reserve, said he expected some of his reservists who are working on the troop withdrawal to remain in Iraq until the last minute.

"We'll be the last ones to leave because we have to get all the combat forces out and then we shut down all the operations," said Stultz, who flew in from the United States to visit troops in Balad for Christmas.

"I would fully expect that there will be some American forces still shutting things down here on December 25 before they leave by December 31."

Stultz, as well as other soldiers like Kittleson who have previously spent Christmas in Iraq, said they were able to mark the holiday more openly this year than in previous years due to a drop in violence.

At Balad, many U.S. soldiers took part in a 5 km early morning run and later feasted on a traditional Christmas lunch.

"In Christmas of 2003, we really didn't know it was Christmas. We were on operations, we were going full force, we were on point, on alert," he added.

Although violence has subsided from the sectarian warfare in 2006-07, killings and bombings still occur daily.

Recent attacks have also targeted Iraq's Christian minority, with a siege on a cathedral in central Baghdad on October 31 ending with 52 hostages and police killed.

U.S. soldiers at Balad condemned the attacks but most said violence had ebbed from their previous deployments.

"This is a time for hope ... bringing hope to Iraq, that they (Iraqis) will take over and we'll give them all the tools that they need to be a success," said Lieutenant Colonel Kimberley Norris-Jones of the U.S. Army Reserve 108th Division.