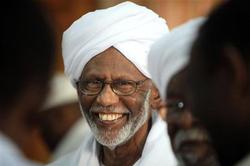 KHARTOUM (Reuters) - Sudanese security forces on Tuesday arrested opposition leader Hassan al-Turabi and eight other party officials after they called for a "popular revolution" if Khartoum did not reverse price rises.

Turabi's arrest comes at a politically sensitive time for the government of President Omar Hassan al Bashir, who stands to lose control over the oil-producing south which last week voted in an independence referendum.

It also comes as Tunisia grapples with fallout from the ouster of its long-time president Zine al-Abidine Ben Ali, who fled the country on Friday after three weeks of violent unrest sparked by social grievances.

Sudan's opposition threatened on Sunday to take to the streets if the government did not remove its finance minister and dismantle parliament over the decision to raise prices on a range of goods.

"This is criminal - how can they arrest a man who is 78 years old and put him in prison? We are scared for him," Turabi's tearful wife Wisal al-Mahdi told Reuters.

Ben Ali's overthrow in Tunisia has reverberated across the Arab world, raising concerns about stability in other countries in the region which share the same mix of social, economic and political problems.

The country is grappling with a current account deficit and a currency devaluation that is driving up inflation.

This month Khartoum cut subsidies on petroleum products and key commodity sugar, prompting protests over the past week, quelled only by baton-wielding police firing teargas.

Islamist leader Turabi has been in and out of jail since his split from Bashir's ruling party in 1999/2000.

Khartoum has long feared Turabi's influence, believing many of his supporters still remain in key positions of the army and security services.

The Sudanese Media Center, a news agency with close links to Sudan's feared intelligence service, said Darfur rebels arrested last week had given new evidence of Turabi's support for them.

Turabi has never denied advising Darfur's insurgents but says he has not armed or supported them. The conflict in Sudan's west erupted in early 2003 with rebels demanding a better share of wealth and power.

The International Criminal Court issued an arrest warrant for President Omar Hassan al-Bashir for war crimes and genocide during a brutal counter-insurgency campaign in the region, charges Bashir denies.

Turabi is usually arrested during times of difficulty for the government, most notably after Darfur rebels launched an unprecedented attack on the capital in 2008.

No charges were brought against him.

His party's newspaper was closed down last year and three staff were jailed in trials condemned by rights groups as unfair.