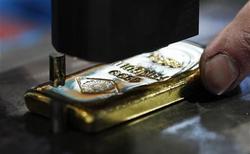 NEW YORK (Reuters) - Gold jumped to an all-time high above $1,450 an ounce on Tuesday, as peak crude and corn prices fanned inflation fears and a downgrade of Portugal's credit rating drew attention to euro zone problems.

Bullion rose more than 1 percent, its biggest gain in more than a month of range-bound trading. Silver soared to a 31-year peak. Both drew support from Federal Reserve Chairman Ben Bernanke's comments late on Monday suggesting he was committed to completing a $600 billion stimulus program as scheduled in June.

On technical charts, gold broke above a recent double-top technical formation around $1,440 an ounce. This added to a rush of buying triggered by news that Portugal's leading banks threatened to stop buying government debt hours after a Moody's downgrade.

"Bernanke's comment makes inflation a more real event in the United States. He at least acknowledged the fact that the Fed needs to monitor inflation very closely, and that spooked investors into gold," said Mark Luschini, chief investment strategist at broker-dealer Janney Montgomery Scott with $53 billion in assets under management.

U.S. gold futures for June delivery settled up 1.4 percent at $1,452.50, with trading volume approaching 160,000 lots, about one-fourth below the 30-day average but sharply higher than that of Monday's.

Investor Dennis Gartman, publisher of the Gartman Letter, said gold was free from liquidation pressure once it breached $1,441 an ounce, a level which had triggered selling.

"It appears that gold is beginning a new up-trend after its recent consolidation," said Adam Sarhan of Sarhan Capital. "If gold negates this breakout and falls back below $1,440 to $1,430, one would expect sideways action to continue."

Silver gained 1.8 percent to $39.12 an ounce, after hitting a session high of $39.25. That was the highest since the Hunt Brothers cornered the market in the early 1980s, when silver briefly hit a record of just below $50 an ounce.

Silver outperformed gold in the first quarter, rising 22 percent while gold rose 0.7 percent. The gold:silver ratio, which shows how many silver ounces are needed to buy an ounce of gold, fell to a 28-year low at 37.3.

UBS said silver investors show no sign of being ready to sell, even though there is a "real danger that silver prices have traveled too fast, too soon." Silver at $40 an ounce appears inevitable in the near term, UBS said.

Rising oil and grain prices boosted gold's appeal as an inflation hedge. Brent crude rose to a 2-1/2-year highs on geopolitical risks to supply from the Middle East, while corn futures hit a record high on persistent worries over tight supplies.

On Monday, Bernanke said an increase in U.S. inflation has been driven primarily by rising commodity prices globally, and was unlikely to persist. He said the Fed would monitor inflation and inflation expectations very closely.

"What it shows is that big money continues to believe gold will go higher...because Bernanke wants to grow at any cost," said Axel Merk, portfolio manager of the Merk Mutual Funds, which manages more than $600 million of fund assets.

Gold rose more after the Fed released minutes of its March 15 meeting, showing some Fed officials believed they would have to hold to an easy monetary policy course beyond this year, while a few said the central bank should move to tighter conditions before year-end.

Last November, the Fed initiated a $600 billion bond buying program. The program is scheduled to end in June. Gold has been a major beneficiary since the Fed has kept short-term rates near zero since December 2008.

Gold is also benefiting from concerns that some smaller euro zone economies such as Portugal and Ireland will keep struggling with sovereign debt, and from jitters over Western air strikes in Libya and unrest in the Middle East.

Earlier in the session, gold fell in tandem with other commodities after China raised interest rates for the second time this year.

Gold has largely ignored previous monetary tightening from China, which tends to weigh more heavily on industrial commodities like copper. In addition, official data from China shows that inflation appears to be tapering off after its series of rate hikes this year.

Investors will seek more clues from an interest rate decision from an European Central Bank policy meeting on Thursday. The ECB is widely expected to raise its benchmark rate by 25 basis points to 1.25 percent.

Higher interest rates usually weigh on gold, but the metal could gain if rate differentials weaken the U.S. dollar.