Economic hit from Japan quake seen up to $200 billion 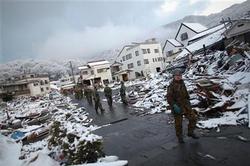 TOKYO (Reuters) - Japan's devastating earthquake and deepening nuclear crisis could result in losses of up to $200 billion for the world's third largest economy but the global impact remains hard to gauge five days after a massive tsunami battered the northeast coast.

As Japanese officials scrambled to avert a catastrophic meltdown at a nuclear plant 240 km (150 miles) north of the capital Tokyo, economists took stock of the damage to buildings, production and consumer activity.

The disaster is expected to hit Japanese output sharply over the coming months, but economists warned it could result in a deeper slowdown if power shortages prove significant and prolonged, delaying or even scotching the "v-shaped" recovery that followed the 1995 Kobe earthquake.

Most believe the direct economic hit will total between 10-16 trillion yen ($125-$200 billion), resulting in a contraction in second quarter gross domestic product (GDP) but a sharp rebound in the latter half of 2011 as reconstruction investment boosts growth.

"The economic cost of the disaster will be large," economists at JP Morgan said. "There has been substantial loss to economic resources, and economic activity will be impeded by infrastructure damages (like power outages) in the weeks or months ahead."

Japanese stocks suffered their worst two-day rout since the 1987 crash on Monday and Tuesday, losing a whopping $626 billion in value, before rebounding 5.7 percent on Wednesday as hedge funds rushed to cover short positions.

But traders remained skittish, swayed by each new development at the stricken Fukushima power plant and alert to signs Japanese companies and insurers could sell sizeable foreign assets and repatriate funds to cover the costs of the nuclear crisis, quake and tsunami.

Although the damage to infrastructure has been severe, some of the biggest risks to the economy may come from indirect market consequences of the disaster, such as a rise in the Japanese yen.

The yen surged to an all-time high against the dollar after the Kobe earthquake in 1995 as Japanese firms pulled funds home. The dollar has fallen 3 percent against the yen since the disaster and is now close to the low hit after Kobe.

The direction of the yen could have a big impact on Japanese carmakers like Toyota Motor Co, Nissan Motor and Honda Motor, which build between 22 and 38 percent of their cars at home.

HSBC Chief Economist Stephen King said it was still too early to put a figure on the economic costs as the scale of the disaster was not yet clear.

The area of Japan affected by the tsunami produces around 4.1 percent of the country's GDP, suggesting first-round economic effects could be limited, he said. But with the fate of the Fukushima nuclear reactors still unclear, Japan may not have felt the full force of the disaster yet.

"At this stage, it's too early to come up with meaningful estimates of the overall impact of the terrible events in Japan," King wrote in a research note.

"Knee-jerk economic and financial reactions to shocks and disasters often fall wide of the mark," he noted, pointing to erroneous predictions of a U.S. recession following the September 11, 2001 attacks and of a major hit from the 2004 Asian tsunami.

However, reflecting the high degree of uncertainty about the global economic impact of the disaster, the U.S. Federal Reserve made no mention of Japan in a statement issued after its policy meeting on Tuesday.

The European Central Bank, which warned earlier this month that it could hike rates in April, also appears to be in wait-and-see mode even as money markets scale back their expectations for monetary tightening this year.

Japan's public debt is twice the size of its $5.3 trillion economy, the highest ratio of any large developed country in the world. But unlike other high debt countries like Greece, only five percent of Japan's debt is held by foreign investors so the risks of a funding crisis are limited.

Still, in a sign European leaders may be nervous about their debt crisis spreading to Japan following the disaster, France said it had called a meeting of G7 finance ministers and central bankers to respond to the crisis, mentioning possible purchases of Japanese debt.

For now the government is using 200 billion yen in emergency reserves to pay for anti-crisis efforts. The rapidly evolving disaster has prevented government officials from working on an emergency budget which could be in the range of 5-10 trillion yen.

Some ruling party lawmakers have proposed a special tax to pay for disaster relief, but Finance Minister Yoshihiko Noda has told allies he is not considering tax increases.

In a bid to reassure investors that fiscal conditions will not spin out of control, Japan has capped new bond sales at 44 trillion yen in recent years, but that ceiling is likely to be scrapped now.

"Basically, the government needs to scrap the 44 trillion yen cap," said Seiji Adachi, an economist at Deutsche Securities in Tokyo. "It needs to compile an emergency budget as soon as possible, at least in the next one to two months."

Huge fund injections from the Bank of Japan have kept borrowing costs low so far and there are no signs of strains in Japan's financial system.

Sources told Reuters that the central bank, which eased monetary policy on Monday by doubling funds available for asset purchases to 10 trillion yen, was likely to take further steps as soon as next month.