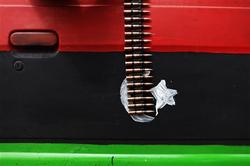 Obama signed the order, known as a presidential "finding", within the last two or three weeks, according to government sources familiar with the matter.

Such findings are a principal form of presidential directive used to authorize secret operations by the Central Intelligence Agency. This is a necessary legal step before such action can take place but does not mean that it will.

As is common practice for this and all administrations, I am not going to comment on intelligence matters," White House spokesman Jay Carney said in a statement. "I will reiterate what the president said yesterday -- no decision has been made about providing arms to the opposition or to any group in Libya."

News that Obama had given the authorization surfaced as the President and other U.S. and allied officials spoke openly about the possibility of sending arms supplies to Gaddafi's opponents, who are fighting better-equipped government forces.

The United States is part of a coalition, with NATO members and some Arab states, which is conducting air strikes on Libyan government forces under a U.N. mandate aimed at protecting civilians opposing Gaddafi.

Interviews by U.S. networks on Tuesday, Obama said the objective was for Gaddafi to "ultimately step down" from power. He spoke of applying "steady pressure, not only militarily but also through these other means" to force Gaddafi out.

Obama said the U.S. had not ruled out providing military hardware to rebels. "It's fair to say that if we wanted to get weapons into Libya, we probably could. We're looking at all our options at this point," he told ABC News anchor Diane Sawyer.

In Washington, Secretary of State Hillary Clinton insisted to reporters that no decision had yet been taken.

U.S. officials monitoring events in Libya say neither Gaddafi's forces nor the rebels, who have asked the West for heavy weapons, now appear able to make decisive gains.

In order for specific operations to be carried out under the provisions of such a broad authorization -- for example the delivery of cash or weapons to anti-Gaddafi forces -- the White House also would have to give additional "permission" allowing such activities to proceed.

Former officials say these follow-up authorizations are known in the intelligence world as "'Mother may I' findings."

In 2009 Obama gave a similar authorization for the expansion of covert U.S. counter-terrorism actions by the CIA in Yemen. The White House does not normally confirm such orders have been issued.

Because U.S. and allied intelligence agencies still have many questions about the identities and leadership of anti-Gaddafi forces, any covert U.S. activities are likely to proceed cautiously until more information about the rebels can be collected and analyzed, officials said.

"The whole issue on (providing rebels with) training and equipment requires knowing who the rebels are," said Bruce Riedel, a former senior CIA Middle East expert who has advised the Obama White House.

Riedel said that helping the rebels to organize themselves and training them how use weapons effectively would be more urgent then shipping them arms.

Sending in weapons would arguably violate an arms embargo on Libya by the U.N. Security Council imposed on February 26, although British, U.S. and French officials have suggested there may be a loophole.

Getting a waiver would require the agreement of all 15 council members, which is unlikely at this stage. Diplomats say any countries that decided to arm the rebels would be unlikely to seek formal council approval.

An article in early March on the website of the Voice of America, the U.S. government's broadcasting service, speculated on possible secret operations in Libya and defined a covert action as "any U.S. government effort to change the economic, military, or political situation overseas in a hidden way."

The article, by VOA intelligence correspondent Gary Thomas, said covert action "can encompass many things, including propaganda, covert funding, electoral manipulation, arming and training insurgents, and even encouraging a coup."

U.S. officials also have said that Saudi Arabia and Qatar, whose leaders despise Gaddafi, have indicated a willingness to supply Libyan rebels with weapons.

Members of Congress have expressed anxiety about U.S. government activities in Libya. Some have recalled that weapons provided by the U.S. and Saudis to mujahedeen fighting Soviet occupation forces in Afghanistan in the 1980s later ended up in the hands of anti-American militants.

There are fears that the same thing could happen in Libya unless the U.S. is sure who it is dealing with. The chairman of the House intelligence committee, Rep. Mike Rogers, said on Wednesday he opposed supplying arms to the Libyan rebels fighting Gaddafi "at this time."

"We need to understand more about the opposition before I would support passing out guns and advanced weapons to them," Rogers said in a statement.

(Additional reporting by Susan Cornwell in Washington and Louis Charbonneau at the United Nations; Editing by David Storey and Christopher Wilson)