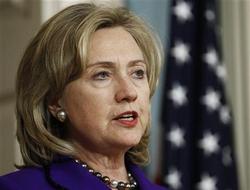 President Barack Obama will lay out U.S. policy toward the Middle East and North Africa in the coming weeks, Clinton told Arab and U.S. policy makers in a speech that placed particular emphasis on Israeli-Palestinian peace.

Obama's launch of direct Israeli-Palestinian peace talks last year went nowhere and he is under pressure to make a new initiative or face the prospect of the Palestinians seeking the U.N. General Assembly's blessing for a Palestinian state.

"The president will be speaking in greater detail about America's policy in the Middle East and North Africa in the coming weeks," Clinton said at the U.S.-Islamic World Forum, a gathering sponsored by Qatar and the Brookings Institution, a Washington think tank.

"America's core interests and values have not changed, including our commitment to promote human rights, resolve long-standing conflicts, counter Iran's threats and defeat al Qaeda and its extremist allies," she added. "This includes renewed pursuit of comprehensive Arab-Israeli peace."

Clinton spoke against the backdrop of the popular revolts that have toppled long-time authoritarian leaders in Tunisia and Egypt this year and spurred public protests in much of the Arab world, including Libya, Bahrain, Syria and Yemen.

"The status quo between Palestinians and Israelis is no more sustainable than the political systems that have crumbled in recent months," she said, saying the only way to meet both people's aspirations was through a two-state solution.

"And while it is a truism that only the parties themselves can make the hard choices for peace, there is no substitute for continued, active American leadership -- and the president and I are committed to that," she added.

LITTLE TO SHOW FOR OBAMA EFFORTS

While Obama came into office saying that settling the six-decade Arab Israeli conflict would be a priority, he has little to show for his effort.

Peace talks aimed at ending the conflict between Israel and the Palestinians broke down last year after Israeli Prime Minister Benjamin Netanyahu refused to extend a partial freeze on Jewish settlement building in the occupied West Bank.

The core issues in the conflict include borders, security, the future of Jerusalem and Jewish settlements in territory Israel occupied in the 1967 Middle East War, and the fate of Palestinian refugees.

Netanyahu is widely expected to visit the United States in may and there have been media reports that he may float fresh ideas on how to get the peace process going again.

"It is very possible that President Obama will even step out ahead of that (Netanyahu's visit) and possibly -- I say possibly -- make his own contribution to where he thinks the process ought to go," Kerry said, saying this could lead to "a responsible effort" toward solving the conflict.

Israeli security officials have cautioned that the absence of any peace initiative could spark a new Palestinian revolt. Over 500 Israeli civilians died in 140 Palestinian suicide bomb attacks from 2000 to 2007. More than 4,500 Palestinians were killed by Israeli forces in the same period.

A bomb planted in a bag exploded near a bus stop in a Jewish district of Jerusalem on March 23, killing a woman and injuring at least 30 people, in an attack police blamed on Palestinian militants.