Analysis: Railroads look to the highways to boost shipments 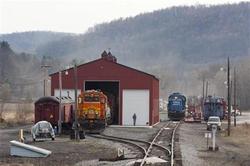 NEW YORK (Reuters) - A recovering U.S. economy and rising fuel prices are giving the nation's railroads a chance to muscle in on what long has been trucker's turf -- the shipment of consumer products.

Big companies including Union Pacific Corp (UNP.N: Quote, Profile, Research, Stock Buzz) and CSX Corp CSX.N are stepping up their investment in intermodal shipping -- handling the 53-foot (16 meter) boxes that are moved expeditiously from ship to truck to train around the world, carrying goods from appliances to toys.

Taking advantage of rising fuel prices -- U.S. diesel costs have surged some 32 percent over the last year -- railroad executives are looking to snag more business from their trucking rivals.

That marks an expansion from railroads' traditional strong suit, hauling bulk commodities such as coal and grain.

Their moves have caught Wall Street's attention, with investors seeing a chance to cash in not only on the railroads themselves but on the makers of shipping containers.

"We're believers in the intermodal story," said Benjamin Hartford, senior research associate at Robert W. Baird. "It's cheaper than truck and more fuel efficient, and it behooves retailers and other shippers to use domestic intermodal."

While most trains and trucks run on the same fuel-- diesel -- trains are far more efficient, using a quarter the amount of fuel a truck does to haul a comparable amount of cargo.

He expects about 10 pct growth in total domestic intermodal cargo shipments this year.

"Over the mid-term and long-term, in our book of business, intermodal will, without question, be the highest volume growth and ... the highest margin improvement," he said Thursday at a Wolfe Trahan conference that was Webcast.

The largest publicly held U.S. railroad spent over $28 billion on infrastructure last decade and plans a record $3.3 billion this year, including significant investment in its intermodal network such as adding track lines and buying containers.

While railroad executives speak of moving shipments off the nation's highways and onto their rails, they are not cutting truckers out of the picture entirely.

Intermodal transport works best for freight that's moving at least 500 miles and is not particularly time-sensitive, such as televisions and refrigerators, rather than trendy fashions or fresh produce.

While a railroad could make a good case for hauling Chinese-made sofas from California to a distribution center in New Jersey, it would not be able to make the next stage of the shipment -- to individual stores.

That is where truckers come back in.

"Rail intermodal is a win-win. Trucking companies are putting a big chunk of freight on the railroads," said Bob Costello, chief economist at American Trucking Associations.

Those views are reflected in railroad shares, which have outperformed the transportation sector. Over the past year, Union Pacific is up almost 50 percent and CSX has risen 52 percent, outpacing the 28 percent rise of the Dow Jones transportation average .

Analysts said railroads could hold the gains they have made over truckers even if the diesel prices come back down.

"Given a lot of capacity fears in the trucking side that aren't fuel related, a lot of this freight will prove sticky for the railroads," said Dahlman Rose analyst Jason Seidl. "If fuel goes down 10 percent from here, all this freight isn't going to rush back to the highway."