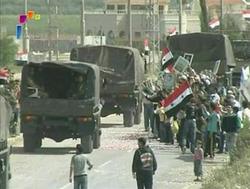 BEIRUT (Reuters) - A growing number of Syrian soldiers are deserting the army to avoid taking part in the military crackdown against protesters demanding the overthrow of President Bashar al-Assad.

Unwilling to open fire on demonstrators who have taken to the streets chanting the revolutionary slogans of uprisings across the Arab world, some Syrian troops have chosen to lay down their arms and flee to neighboring countries like Turkey.

It is difficult to estimate how many have done so, partly because they are afraid to speak out and partly due to severe restrictions on foreign media reporting in Syria, which makes it hard to corroborate accounts inside the country.

But Internet videos have begun increasingly to surface in recent weeks of men displaying military insignia and identification cards who say they have left an army that has used tanks and guns to suppress protesters calling for freedom.

Assad has relied on the armed forces, whose commanders are mostly from his minority Alawite sect, to crack down on protesters, who are mostly from the majority Sunni population.

The shabbiha, irregular Alawite loyalists, have also been deployed. Often clad in black, witnesses and activists say these are among the harshest enforcers of a crackdown that has left at least 1,300 civilians dead, according to rights groups.

In a sign cracks are appearing in the army, Turkey's Anatolian news agency said high-ranking Syrian soldiers and police were among more than 12,000 refugees seeking shelter in Turkey during attacks on protesters in northwestern Syria.

Reuters spoke by telephone to two men presented by Syrian opposition activists as soldiers who had deserted. One was of ethnic Kurdish descent who had escaped to Turkey and another was a captain who said he was originally from the rebellious town of Jisr al-Shughour and was now somewhere by the Turkish border.

Syrian authorities say "armed gangs" and "terrorists" are to blame for the violence. They say at least 500 soldiers and police have been killed by militants.

The first deserter, a 21-year-old conscript from the mainly Kurdish northeastern province of al-Hasaka, told Reuters that officers would force soldiers to watch Syrian television showing "infiltrators" -- a term used by authorities to mean militants entering or backed from abroad -- shooting at protesters.

"Before we went to Deraa, they would tell us there are infiltrators and gunmen among civilians who were opening fire on the army," the conscript said, referring to the southern city where the uprising against Assad began in March.

"And we were eager to go and fight. We believed it, but when we arrived in Deraa, we no longer believed this story.

"We saw the truth in Deraa. We saw that the gunmen were under the protection of the state," he said, referring to the shabbiha. He said he saw militiamen ordered by army officers to kill protesters -- "to show that infiltrators were doing it."

The 21-year-old, who asked that his name be withheld to protect his family in Syria, said had been drafted to the 14th Brigade in December, arrived in Deraa on April 25 and fled a month later. Dressed in civilian clothes, he escaped from Deraa via Damascus and Hasaka, to Turkey, leaving his family behind.

"You were forced to open fire on protesters," said the soldier. "I used to fire in the air, at walls, on the ground, just so they could see that ammunition was being fired.

"In the army, you defend yourself in time of war, but don't go and kill the people of your country, your brothers and your family. My conscience is clear now I don't have to kill people."

Witnesses and opposition activists have reported several occasions when they said soldiers refused to fire on protesters, or when soldiers were killed for refusing to kill demonstrators.

Assad still commands loyalty among the mainly Alawite units led by his brother Maher, including the Republican Guard and the 4th Armored Division, each of which have about 10,000 men backed by tanks.

They are better trained and paid than the rest of the army, which numbers over 200,000 troops including conscripts, and are helped by smaller formations of loyalists and Alawite militias in several parts of the country.

A doctor in a military hospital in Damascus said earlier this month that 17 soldiers with gunshot wounds were brought in from Deraa: "I was working in the emergency room and the soldiers were brought in on trucks," he told Reuters.

"They told me they were shot by shabbiha because they refused to fire on protesters."

Most of the statements from self-declared deserters that have been aired on Arab satellite television channels or in online videos seem to be from the Sunni rank and file, some of whom appear to have been angered to hear news from home of killings in their native provinces.

Experts say that as the crackdown continues in restive regions, defections could draw in more and more senior soldiers.

A man who described himself as Captain Ibrahim Majbour told Reuters by telephone that he had refused to allow his unit to go to places of unrest to fire on protesters. He said he went to the central province of Homs in an unofficial capacity in May where he said shabbiha and security forces were raiding homes.

"I did not participate in the repression of protests," he said, adding that he had feared for his own life and decided to defect. A statement by him is posted on YouTube (www.youtube.com/watch?v=bMEsc5eGW9M&feature=youtu.be).

Majbour said he commanded a unit in the special forces of the 14th Brigade and was originally from Jisr al-Shughour, where the army launched an intensive assault this month.

"I am from Jisr al-Shughour before I am an officer in the army," he said, adding he was angered by seeing "my family homeless and my town destroyed." Speaking from an undisclosed location in the same region, on the Turkish border, he warned:

"The officers will come back to achieve victory for the country and to protect protesters."

He declined to elaborate, but shortly after he spoke on Tuesday a group calling itself the Free Officers Movement said in a statement it was giving the army one week to "determine its position toward the regime and to side with the protesters."

Reuters could not independently determine the authenticity of the group, or how much support it might have.

A man who said he was a Syrian journalist read out the group's statement near the Turkish border. It listed the group's aims, including electing a transitional council, and appointed a Lieutenant Colonel Hussein Harmoush, whose defection has been documented on video, as its official spokesman.

The journalist said the group consisted of 16 officers in refugee camps in Turkey and some 35 still in Syria.

While the capabilities of the group remain unclear, such defections signal a potentially violent new element in the three-month-old unrest that has posed the gravest challenge to Assad's tight control over Syria.

For now, the 21-year-old conscript said, the balance of power is with those with the guns: "How can the regime change when the people have no weapons and the government has them?"