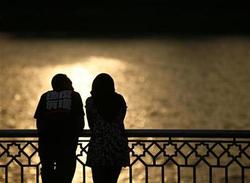 WASHINGTON (Reuters) - You would think that after a few decades of marriage, raising kids and going through the ups and downs of life together, retirement would be a cakewalk for couples. But you'd be wrong.

Spouses who have managed to negotiate a lifetime of decisions together are finding that their well-oiled partnership machine may break down when they face those post-career issues.

For example: He wants to move to the country; she's loving the neighborhood they've known forever. She wants to follow their kids to a new city, and he wants to stay put. He's ready to hang up his spurs and do something different; she wants to work for another five years. She wants to stay in the big house with all the bedrooms ready for grandkids' visits, and he's ready for the no-chores condo. You get the picture.

Those differences are not always easily settled. Husbands and wives who have spent a lifetime compromising may feel like they just don't want to give in one more time. It's no wonder there has been lots of talk (albeit with few statistics) about "gray divorce" becoming epidemic.

"This is a common dilemma," says Roberta Taylor, a therapist and co-author with Dorian Mintzer of "The Couples Retirement Puzzle: Ten Must-Have Conversations for Transitioning to the Second Half of Life," a book devoted to the subject.

"This came up more than any other question" Taylor said, when she and Mintzer were running focus groups on retirement. "People were really looking for different things, and they hadn't talked about it."

Husbands and wives aren't even on the same page when it comes to the facts and figures of their retirement finances, according to a study released today by Fidelity Investments.

Moreover, 73 percent of pre- and post-retirement couples couldn't even agree on whether or not they had a detailed retirement-income plan. Almost a third -- 30 percent -- of already retired couples couldn't even agree on how comfortable their current retirement lifestyle was, while they were living it. Of those couples working with a financial adviser, a third disagreed -- by at least three years -- on how long they had been working with the adviser.

Fidelity has seen a big jump in the number of clients making specific retirement plans "but there's a lot of work to be done," said Fidelity spokesman Chris McDermott. He cited couples' disagreements about "basic things like retirement age, where we're going to live, whether or not both individuals are going to work in retirement."

"These are the foundational elements their retirement plans are going to be based on," he said.

So, talking is good. Here's how to get on the same page, after all those years:

-- Agree on the facts. It's good to have a baseline of information on which to make plans. So both partners should look at all of the details -- how much money you actually have, where it is, who's managing it, and how. In addition, learn and agree on other financial facts: How much is your house worth and how much do you owe on it? Do you have a financial adviser and how does she work for you? How much does she charge? The more information you both have, the easier it will be to make those retirement plans realistic.

-- Break down those dreams so you discover the important parts. That's Taylor's primary advice for disagreeing couples. Instead of digging in on "he wants to sell the house and she doesn't" for example, figure out what's important about that for both of them. Maybe he just wants to sell the house because he's tired of mowing the lawn, and hiring a gardening company would be enough to make him happy. Maybe she just wants to stay because she likes the neighbors, and a smaller, less expensive place in the same town would satisfy her.

-- Learn to switch hit. The Fidelity survey also found that the long tradition of women leaving the investing decisions to the men continues. "The degree to which wives lag their spouses with respect to confidence and engagement, and on some of the income topics was concerning," McDermitt said. Only 35 percent of the wives said they were confident in their ability to assume responsibility for household finances if they had to.

It is not so bad for spouses to specialize; not every partner does every chore equally well or as often. But even in families where one spouse takes the lead on finances, the other spouse should know what's going on and be able to handle the task, if necessary. Perhaps quarterly meetings or explicit instructions would help move couples in that direction.

-- Think creatively. She's a city mouse and he's a country mouse. In many cases, the couple could sell their big family home and buy a smaller condo in both places. Or spend less on a primary residence and rent a place elsewhere for a few months out of the year.

-- Compromise, even if it's hard. After all, there's one sure way to remove options and lower your standard of living in retirement: That's to split up and try to support two households instead of one.

(The Personal Finance column appears weekly. Linda Stern can be reached at linda.stern(at)thomsonreuters.com)