Who's Who in scandal at heart of Murdoch empire 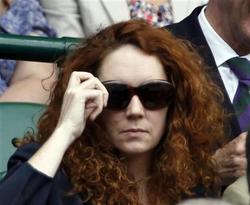 LONDON (Reuters) - A scandal over phone hacking by Britain's biggest selling newspaper escalated on Tuesday after it emerged police were investigating whether the News of the World hacked the phone of a missing schoolgirl who was later found murdered.

That moved the affair, in which the paper has already admitted some staff accessed the voicemails of public figures, close to the heart of the Murdoch empire since one of his top executives was editor at the time the girl was abducted.

Below are some of the key figures in the saga.

Chairman and Chief Executive of News Corporation, the world's largest news conglomerate, which he founded.

News Corp's operations span television, film, newspapers and advertising. Businesses include U.S. cable network Fox, and The Wall Street Journal newspaper, as well as some of Britain's best-selling papers: The Sun, News of the World and The Times.

Australian-born Murdoch was ranked by Forbes magazine as the 13th most powerful person in the world in 2010 and the 117th richest in the world, with a net worth of over $6 billion.

He became a U.S. citizen in 1985 so that he could buy American television stations.

Murdoch's News Corp is currently seeking to buy out British satellite broadcaster BSkyB, a deal expected to cost at least $15 billion, and final government approval for the deal is expected shortly.

A man who easily commands audiences with world leaders, Murdoch's newspapers in particular are believed to wield enormous political influence. In 1992, The Sun declared "It's the Sun Wot Won It" after it campaigned vigorously against Labor leader Neil Kinnock in an election that delivered an unexpected Conservative victory.

Born Rebekah Wade, the 43-year-old has worked for the Murdoch empire since the age of 20, joining Sunday tabloid the News of the World as a secretary before moving to The Sun daily. In 2000, she was appointed editor of the News of the World, making her, at the time, the youngest ever editor of a British national newspaper.

She moved on to edit The Sun in 2003, becoming its first female editor, and spent six years at the helm before her appointment as chief executive of News International.

Brooks rarely gives interviews. In 2003, she told a parliamentary committee her newspaper had paid police for information although News International later said this was not company practice.

Brooks, formerly married to a star of television soap opera "Eastenders," is considered one of Rupert Murdoch's most trusted executives and is politically well-connected. She and her second

On Tuesday, she said she was "sickened" at allegations the News of the World had hacked into the voicemail messages of missing schoolgirl Milly Dowler, later found murdered, in 2002. The Guardian newspaper said an investigator for the paper had also deleted some messages to make room for more, misleading police and the girl's family into thinking she was alive.

"I hope that you all realize it is inconceivable that I knew or, worse, sanctioned these appalling allegations," she wrote in a memo to staff, adding that she would not resign.

The prime minister became linked to the scandal after he appointed as his director of communications Andy Coulson, who had been News of the World editor during the time that most phone-hacking is alleged to have taken place at the tabloid.

Cameron said that if allegations were true that a private investigator hacked into the phone of missing teenager Milly Dowler, "this is a truly dreadful act."

Coulson resigned as News of the World editor in 2007 after one of his reporters and a private investigator were convicted of hacking into phones of members of the royal family, although Coulson insisted he knew nothing about the phone hacking.

He then resigned as Cameron's communications director earlier this year after fresh allegations surfaced that connected journalists at the paper to a spate of other attempts to hack the voicemail of politicians and celebrities. He said media coverage of the scandal made it impossible to do his job.

Hunt is the Secretary of State for Culture, Olympics, Media and Sport. He has final say over whether News Corp should be allowed to buy out BSkyB after Business Secretary Vince Cable was stripped of the decision-making power late last year.

Cable lost the right to adjudicate on media deals after he was taped "declaring war" on Rupert Murdoch.

Hunt last week rejected complaints the News Corp buyout of BSkyB would give Murdoch too much power and influence, effectively clearing the way for the multi-billion-dollar deal.

However, he announced a final consultation period until July 8 to consider further undertakings designed to guarantee the editorial independence of Sky News.

Clive Goodman, who reported on the royal family for the News of the World, was jailed for four months after writing stories based on illegal phone taps carried out by private detective Glenn Mulcaire for which he paid with cash.

Mulcaire, who was jailed for six months, was also paid an annual retainer of 100,000 pounds ($160,000) by News of the World for other investigative services.

Aged 13, she went missing on her way home from school in the London suburb of Walton on March 21, 2002. Despite a huge police hunt and massive publicity, her body was found only six months later. This year, convicted killer Levi Bellfield was tried for and, on June 23, found guilty of the teenager's murder.