HP resurrects TouchPad for one last go at the iPad 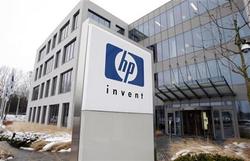 LOS ANGELES (Reuters) - Hewlett Packard Co plans to crank out "one last run" of TouchPads, days after declaring it will kill off a line of tablets that failed to challenge Apple Inc's command of the booming market.

A day after the chief of HP's personal devices division told Reuters the TouchPad might get a second lease on life, HP announced a temporary about-face on the gadget after being "pleasantly surprised" by the outsized demand generated by a weekend fire-sale.

HP slashed the price of its tablet to $99 from $399 and $499 the weekend after announcing the TouchPad's demise on August 18, part of a raft of decisions intended to move HP away from the consumer and focus on enterprise clientele.

That ignited an online frenzy and long lines at retailers as bargain-hunters chased down a gadget that had been on store shelves just six weeks.

"The speed at which it disappeared from inventory has been stunning," the company said. "We have decided to produce one last run of TouchPads to meet unfulfilled demand."

HP may lose money on every TouchPad in its final production run. According to IHS iSuppli's preliminary estimates, the 32GB version carries a bill of materials of $318.

"We don't know exactly when these units will be available or how many we'll get, and we can't promise we'll have enough for everyone. We do know that it will be at least a few weeks before you can purchase," HP said in a blogpost.

Critics have blasted HP for wavering on pivotal decisions, such as its original stated intention to integrate its webOS software into every device it makes, followed by a decision to stop making webOS gadgets, including the TouchPad.

The storied Silicon Valley giant is struggling to shore up margins as smartphones and tablets eat away at its core PC business, the world's largest. On August 18, HP said it was also considering spinning off the PC division.

CEO Leo Apotheker is under immense pressure from investors unhappy with HP's back-and-forth on strategy. The former SAP chief has also been forced to slash HP's sales estimates three times since he took over last November.

In a resounding rejection of his grand vision, shareholders sent HP shares down almost 20 percent the day it announced its sweeping moves, which included a pricey acquisition of software player Autonomy. That wiped out $16 billion of value from HP in the stock's worst single-day fall since the Black Monday stock market crash of October 1987.

HP declined to comment beyond the blogpost. Shares in the company were down marginally in after-hours trade on Tuesday.