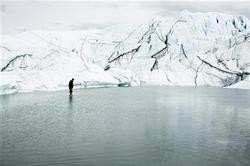 WASHINGTON (Reuters) - More Americans than last year believe the world is warming and the change is likely influenced by the Republican presidential debates, a Reuters/Ipsos poll said on Thursday.

The percentage of Americans who believe the Earth has been warming rose to 83 percent from 75 percent last year in the poll conducted Sept 8-12.

Republican presidential candidates, aside from Jon Huntsman, have mostly blasted the idea that emissions from burning fossil fuels and other human actions are warming the planet.

As Americans watch Republicans debate the issue, they are forced to mull over what they think about global warming, said Jon Krosnick, a political science professor at Stanford University.

And what they think is also influenced by reports this year that global temperatures in 2010 were tied with 2005 to be the warmest year since the 1880s.

"That is exactly the kind of situation that will provoke the public to think about the issue in a way that they haven't before," Krosnick said about news reports on the Republicans denying climate change science.

This year has been a record year for the kind of costly weather disasters -- including Hurricane Irene, which raked the East Coast -- that scientists have warned would be more frequent with climate change.

The United States suffered 10 natural disasters in 2011 with economic losses of $1 billion or more, according to the National Weather Service.

Unlike many other issues that divide Republicans and Democratic voters, such as healthcare or how to deal with the deficit and debt, a majority of Americans from both major parties agree on global warming, the poll found. Some 72 percent of Republicans believe global warming is happening and 92 percent of Democrats do, it found.

Global warming could be an important issue in next year's election, because some 15 percent of voters see it as their primary concern, said Krosnick, who is also a university fellow at the Resources for the Future think tank.

If President Barack Obama, a Democrat, can define himself as the environmental candidate, he could have a large advantage over a Republican, Krosnick said. If however, a Republican softens his or her stance on climate and Obama, who has failed to pass a climate bill in his first term, moves more to the center, it may not be a factor in the election.

Some 71 percent of the Americans who believe warming is happening think that it is caused either partly or mostly by humans, while 27 percent believe its is the result of natural causes, the poll found.

While more Americans believe in global warming, the skeptics are becoming more entrenched in their belief that it is not happening. In 2010 the certainty of skeptics was 35 percent, while it was 53 percent in 2011. Again, the Republican climate skeptics are influencing that, Krosnick said.