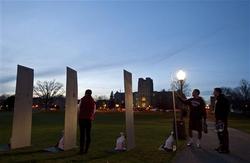 The incident prompted a lockdown of the campus on Thursday and revived memories of a gunman's 2007 rampage that left 33 people dead in one of the worst shooting incidents in U.S. history.

The man was not a Virginia Tech student and had no known connection to Officer Deriek W. Crouse, 39, officials said. Police said they were still confirming the man's identity and investigating the motive for the shooting.

Ballistics testing confirmed the same weapon was used in both shootings, police said.

Shortly after noon on Thursday, Crouse had a vehicle stopped in a campus parking lot when he was approached a man and fatally shot while still in his car, police said. The man then fled.

About 30 minutes later, a Montgomery County sheriff's deputy saw a man acting suspiciously in a parking lot about a half a mile/0.8 km away from the first shooting. After briefly losing sight of the man, the deputy found him dead on the ground with a handgun nearby, police said.

Police later recovered a discarded backpack on campus with clothing inside that was similar to that worn by the man seen in video taken by Crouse's patrol car.

The man apparently changed clothes on the way to the second parking lot, Virginia State Police spokeswoman Corinne Geller said at a media briefing held on Virginia Tech's campus. Police are investigating writing found on a wall near the backpack, she said.

Officials did not lift the lockdown on campus until later on Thursday afternoon because they could not immediately identify the man as the shooter and were still investigating tips from the public, Geller said. The body did not have identification on it, but police found an ID in the backpack.

Officials are still trying to determine the man's whereabouts before the shooting, Geller said. It's likely he is connected to a vehicle that was stolen in nearby Radford, Virginia, but police haven't confirmed that, she said.

A Virginia Tech student was driving the car that Crouse had stopped, Geller said. The student has been cooperating in the investigation.

Crouse joined the Virginia Tech police department in October 2007 and is survived by his wife, five children and step-children, and his mother and brother.

"His death is a tremendous loss to our department," Virginia Tech police chief Wendell Flinchum said at the briefing. Other departments will help patrol the campus while officers grieve, he said.

The incident evoked grim memories of April 2007 when a mentally deranged student killed 32 people and wounded 25 before committing suicide on campus about 250 miles/400 km southwest of Washington.

A candlelight vigil has been planned for Friday night near the memorial for the victims of the 2007 shooting.