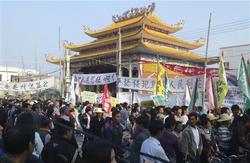 BEIJING (Reuters) - Villagers in southern China on Thursday defied authorities and continued protests over a death in custody and land dispute in the latest outburst of simmering rural discontent that is eroding the ruling Communist Party's grip at the grassroots.

Many hundreds of residents in Wukan Village in Guangdong province held an angry march and rally despite moves by authorities to halt a land project at the center of the months-long unrest and detain local officials involved.

"The whole village is distraught and enraged. We want the central government to come in and restore justice," said one resident who described the scene.

He and another resident, both speaking on condition of anonymity, said villagers remain enraged over last weekend's death in custody of Xue Jinbo, 42, who was detained on suspicion of helping organize protests against land seizures.

"We won't be satisfied until there is a full investigation and redress for Xue Jinbo's death," said the second resident.

"If you say he wasn't beaten to death, then you can show us the body," another villager who had his face hidden from the camera by the hood of his jacket told Hong Kong's Cable TV.

"If there really isn't any injury on the body, then why would you not return the body to us?"

Rural land in China is mostly owned in name by village collectives, but in fact officials can mandate its seizure for development in return for compensation, which residents often say is inadequate and does not reflect the profits reaped.

The government of Shanwei, a district including Wukan, said on Wednesday a "handful" of Communist Party members and officials accused of misdeeds over the disputed land development were detained and that the main land development project had been suspended, the official Xinhua news agency reported.

In a bid to allay suspicions that other villagers detained over protests in September had been abused, the local government put online footage of four suspects being visited by relatives and reassuring them of their wellbeing. (www.shanwei.gov.cn/163661.html)

But for the two residents interviewed it was not enough to defuse fury over the death of Xue, whom villagers believe was the victim of police brutality -- a charge the government denies, citing an autopsy that found he died of heart failure.

Wukan has been surrounded by police and anti-riot units.

China's leaders, determined to maintain one-party control, worry that such outbursts might turn into broader and more persistent challenges to their power.

"Is there a risk of disruption? Yes, absolutely. Is this a place just waiting to explode? No," said Lieberthal, director of the John L. Thornton China Center at the Brookings Institution, a Washington D.C. think tank.

"The chances of long-term, systemic instability are very, very small. The chances of some major disruption -- like 1989, but on a much larger scale -- are considerably greater, but still the odds are they can avoid it," he said.

Wukan, with its clannish unity and big stake in rising land values, is an example of the kind of slow-burning discontent that is corroding party power at the grassroots.

Residents say hundreds of hectares of land was acquired unfairly by corrupt officials in collusion with developers. Anger in the village boiled over this year after repeated appeals to higher officials.

Although China's Communist Party has ruled over decades of economic growth that have protected it from challenges to its power, the country is confronted by thousands of smaller scale protests and riots every year.

One expert on unrest, Sun Liping of Tsinghua University in Beijing, has estimated that there could have been over 180,000 such "mass incidents" in 2010. But most estimates from Chinese scholars and government experts put numbers at about half that in recent years.

The Chinese government has not given any unrest statistics for years.

The real worry for Beijing is not the sheer number of such protests, but their tendency to become more persistent and organized - both features on display in the unrest in Wukan, where there were torrid riots in September.