Iran says in touch with powers on new talks, EU denies it 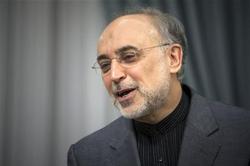 By Robin Pomeroy and Ramin Mostafavi

TEHRAN (Reuters) - Iran said on Wednesday it was in touch with big powers to reopen talks soon but the European Union denied this, and Britain said Tehran would have to show it was serious if it wanted to avoid more EU sanctions over suspicions it is seeking nuclear weapons.

A year after the last talks fell apart, confrontation is brewing as the EU prepares to intensify sanctions against Iran with an embargo on its economically vital oil exports.

EU diplomats said on Wednesday that member governments had also agreed in principle to freeze the assets of Iran's central bank alongside the planned oil embargo, but had yet to agree how to protect non-oil trade from sanctions.

Iran has threatened to block the Strait of Hormuz, used for a third of the world's seaborne oil trade, if it cannot sell its own crude, fanning fears of a descent into war in the Gulf that could inflame the Middle East.

Iranian politicians said U.S. President Barack Obama had expressed readiness to negotiate in a letter to Tehran, a step that might relieve tensions behind recent oil price spikes.

"Negotiations are going on about venue and date. We would like to have these negotiations," Iranian Foreign Minister Ali Akbar Salehi told reporters during a visit to Turkey.

"Most probably, I am not sure yet, the venue will be Istanbul. The day is not yet settled, but it will be soon."

A spokesman for EU foreign policy chief Catherine Ashton, representing the six powers, denied there were any fresh discussions with the Islamic Republic to organize a meeting.

"There are no negotiations under way on new talks," he said in Brussels. "We are still waiting for Iran to respond to the substantive proposals the High Representative (Ashton) made in her letter from October." Iran has yet to respond formally.

British Foreign Secretary William Hague said Iran had to be ready for serious negotiations. "It is significant that when we are discussing additional sanctions in the European Union an offer of negotiations emerges from Iran," he said.

"We will not be deterred from imposing additional sanctions simply by the suggestion there may be negotiations. We want to see actual negotiations," he told a news conference in Brazil.

"In the absence of such meaningful negotiations, of course, the pressure for greater peaceful but legitimate pressure will continue," he said, referring to a meeting on Monday of EU ministers that will discuss an oil embargo on Iran.

Washington has yet to respond to the Iranian suggestions of talks. Defense Secretary Leon Panetta said on Wednesday only that the U.S. military was fully prepared to deal with any threats by Iran to close the Strait of Hormuz.

Ashton wrote to Iranian negotiator Saeed Jalili to stress that the West still wanted to resume talks but Iran must be ready to engage "seriously in meaningful discussions" about ways to ensure its nuclear work would be wholly peaceful in nature.

The Islamic Republic has insisted in sporadic meetings over the past five years that talks focus on broader international security issues, not its nuclear program.

The last talks between Iran and the permanent members of the U.N. Security Council - the United States, Britain, France, Russia and China - along with Germany stalled in Istanbul a year ago, with the parties unable to agree even on an agenda.

Since then, a U.N. nuclear watchdog report has lent weight to concern that Iran has worked on designing a nuclear weapon. Washington and the European Union have turned to extending hitherto modest sanctions in place since 2006 to target Iranian oil.

EU foreign ministers are expected to approve a phased ban on imports of Iranian oil at the meeting on January 23 - three weeks after the United States passed a law that would freeze out any institution dealing with Iran's central bank, effectively making it impossible for most countries to buy Iranian oil.

"On the central bank, things have been moving in the right direction in the last hours," one EU diplomat said on Wednesday. "There is now a wide agreement on the principle. Discussions continue on the details."

Iran has said it is ready to talk but has also started shifting uranium enrichment to a deep bunker where it would be less vulnerable to the air strikes Israel says it could launch if diplomacy fails to curb Tehran's nuclear drive.

Western diplomats say Tehran must show willingness to change its course in any new talks. Crucially, Tehran says other countries must respect its right to enrich uranium, the nuclear fuel which can provide material for atomic bombs if enriched to much higher levels than that suitable for power plants.

Russia, a member of the six power group that has criticized the new EU and U.S. sanctions, said the last-ditch military option mooted by the United States and Israel would ignite a disastrous, widespread Middle East war.

"On the chances of whether this catastrophe will happen or not you should ask those who repeatedly talk about this," Foreign Minister Sergei Lavrov told a news conference in Moscow.

"I have no doubt that it would pour fuel on a fire which is already smoldering, the hidden smoldering fire of Sunni-Shi'ite (Muslim) confrontation, and beyond that (it would cause) a chain reaction. I don't know where it would stop."

Israeli Prime Minister Benjamin Netanyahu, speaking during a visit to the Netherlands on Wednesday, repeated his view that "Iran must not be allowed to develop nuclear weapons, period."

Earlier in the day, his Defense Minister Ehud Barak said any decision about an Israeli attack on Iran was "very far off."

China, which shares Russia's dislike of the new Western moves to stop Iran exporting oil, said U.S. sanctions that Obama signed into law on December 31 had no basis in international law.

Several members of Iran's parliament who discussed the matter on Wednesday said it included the offer of talks.

"In this letter it was said that closing the Strait of Hormuz is our (U.S.) 'red line' and also asked for direct negotiations," the semi-official Fars news agency quoted lawmaker Ali Mottahari as saying.

"The first part of letter has a threatening stance and the second part has a stance of negotiation and friendship."

Washington has often said it has a dual-track approach to Iran, leaving open the offer of talks while seeking ever tighter sanctions as long as Tehran does not rein in its nuclear work.

But any fresh opening to Tehran might be a risky strategy for Obama in an election year as aspiring Republican presidential challengers compete over who is toughest on a country Washington has long considered a pariah state.