LONDON, June 11 (Reuters) - The International Energy Agency expects spare capacity in the OPEC+ alliance to rise by 180,000 barrels per day (bpd) next year to 50.55 million bpd, driven by hikes from Mideast Gulf producers.

"Saudi Arabia and Kuwait are expected to continue to build up production in the shared Neutral Zone, the UAE raises capacity at the Upper Zakum field, among others, and Iraq further develops its giant southern fields," the IEA said in a monthly report on Friday.

Other members in the alliance between the Organization of the Petroleum Export Countries and other producers such as Russia are expected to keep investing to keep capacity steady next year.

Capacity is expected to slip for some West African producers, IEA data shows. 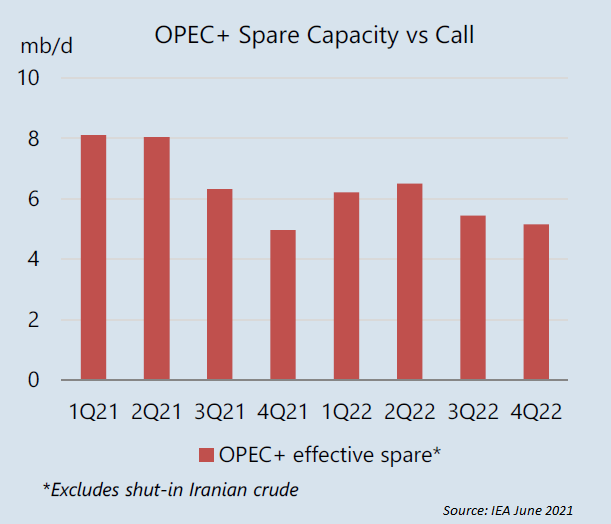 The IEA anticipates the call on OPEC+ crude to rise by 1.2 million bpd to 43.3 million bpd next year. For the fourth quarters of this year and next, however, the agency expects the figure to rise to 44 million bpd.

"OPEC+ effective spare capacity (excluding shut-in Iranian crude) in 2021 would fall to 5 million bpd in the fourth quarter but in 2022 it could stand at 5.1 million bpd given the planned capacity expansions," the IEA said.

OPEC+ agreed in April to gradually ease oil output cuts from May to July by 2.1 million bpd and confirmed the decision at a meeting on June 1, leaving the group with 5.8 million bpd of cuts.

"There will likely be more pressure on the group in the coming months to bring more of this capacity back to the market, particularly if we remain in the current price environment," bank ING said.

Oil prices were trading near a two-year high of about $73 a barrel on Friday, and were on track for a third week of gains, buoyed by optimism about demand recovery.