LONDON, May 28 (Reuters) - There had been fears for the past year the mere suggestion of major central banks reversing massive pandemic support would send global markets into tailspin. And yet - so far, so good.

Top U.S. Federal Reserve officials said this week it was too soon to take their foot off the gas as the economy was still recovering and inflation spikes are likely transitory. But both vice chairs Richard Clarida and Randal Quarles and other Fed policymakers added that it was probably time to open up the debate about when to ease off its huge bond purchases.

If the Fed is already "talking about talking" about when to ease off support - however far off that may still be - then it's likely that behind closed doors other Fed staffers are actively gaming what Barclays' economists dubbed "The Great Unwind".

With other central banks - such as the Bank of Canada and the Reserve Bank of New Zealand - already signalling tighter policy ahead too, the relative calm in stock and bond markets in recent weeks has been striking.

U.S. Treasury bond markets - the epicentre of such anxiety early in the year - are snoozing. Five and 10-year Treasury yields have been virtually flatlining for almost two months.

The MOVE (.MOVE) index measuring overall volatility in Treasury securities fell to its lowest since February. And stock markets are back stalking record highs.

As long as the patient "taper" preparations come in tandem with the sort of blistering post-lockdown recoveries in activity already evident, then perhaps all is comfortably priced and discounted.

But investor fear of the reversal may be far less than shown in the brief "taper tantrum" of 2013, largely because the Fed subsequently managed that process so smoothly.

Veterans of the last "quantitative tightening" round will remember all the nuanced but crucial signalling around not just reducing purchases but also on when to stop reinvesting the money the Fed gets from bond coupons or maturing notes.

As part of its annual Equity Gilt study this week, Barclays economists mapped out multiple scenarios for how they felt the process would likely go this time around.

As part of that, they acknowledge different risks this time around due to the vast levels of pandemic-related debts incurred by Treasury and around possible disturbances to inflation expectations.

"The risk of disorder seems meaningful," they note.

But one point made in simulating how the Fed may pare back its bloated near-$8 trillion balance sheet goes a way to explain the relative calm at the long end of the bond market at least. 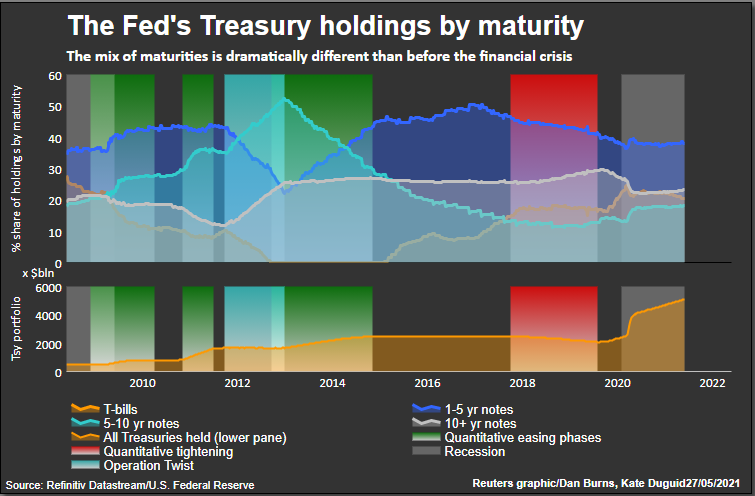 Because the Fed's Treasury bond portfolio is heavily concentrated in securities of below 5 years, the Fed may never actually need to sell a bond to return its balance sheet to its pre-pandemic ratio of 19% of U.S. gross domestic product - from almost 40% at present.

Once it chooses to stop reinvesting the proceeds of maturing bonds, then its overall balance sheet shrinks pretty rapidly over a few years as the bulk of securities come due.

Assuming the Fed ends net purchases of assets at the end of next year, 50% of its Treasury portfolio would then mature within four years and as much as 20% within a year.

If inflation expectations remain under control in Barclays' baseline scenario of an "orderly unwind", the Fed could continue to reinvest the proceeds of maturing bonds until 2025 - which would then see it drop back to pre-COVID levels by 2030.

"The most likely scenario is the Fed phasing out the reinvestment of maturing securities rather than selling long-dated securities," Barclays economists concluded. They stressed they saw the main policy rate - as well as rates on excess bank reserves or reverse repurchase operations - as the primary tools for steering monetary policy.

On that score, the Fed may be talking about talking about tapering its $80 billion per month Treasury buys, but it's still signalling no change in key policy rates before 2023. What's more, futures markets have already priced a high chance of it pulling that forward a bit into late next year.

Citi strategist Ebrahim Rahbari says the bank's base case is a "taper warning" at the Fed's annual Jackson Hole conference in August. But "the lack of a recent market reaction suggests much taper talk is priced, even if more definitive tapering hints likely trigger a somewhat larger response."

Of course, there are other "disorderly" scenarios that cast doubt on the Fed's insistence that post-lockdown inflation spikes are fleeting. Inflation expectations could build and the Fed may have to act more aggressively to restore credibility.

Former Morgan Stanley chief economist and Fed staffer Stephen Roach wrote this week that former Fed chief Arthur Burns' determination to see inflation spikes in the 1970s as transitory one-offs was a "blunder of epic proportions" and there were "haunting similarities" this time around.

But even in a disorderly scenario, Barclays reckon the Fed could simply stop reinvesting maturing bonds sooner, at the end of 2023, and get just as rapid a balance sheet reduction to pre-pandemic levels without selling any bonds outright.

Myriad "ifs" and "buts" around the years ahead still abound - how Treasury fiscal and debt policy evolves, the durability of the recovery and trajectory of inflation, how other central banks act and how the Fed signals on the policy rate.

But management of the balance sheet may be more straightforward than frequently thought.

The opinions expressed here are those of the author, a columnist for Reuters.

by Mike Dolan. Charts by Dan Burns and Barclays. Editing by Pravin Char