An oil tanker is docked while oil is pumped into it at the ships terminal of PDVSA's Jose Antonio Anzoategui industrial complex in the state of Anzoategui April 15, 2015. REUTERS/Carlos Garcia Rawlins/File Photo

China has over the past 12 months bought an estimated $3.5 billion worth of Venezuelan oil relabelled as Malaysian fuel, according to cargo tracking and industry sources, throwing Caracas a vital lifeline while it grapples with a collapsing economy amid tough U.S. sanctions.

Much of it has come in as bitumen blend, a mix of tar-like heavy crudes and refinery residue fuels that doesn't attract consumption tax like fuel oil and also isn't subject to China's quotas on oil imports.

Bitumen blend shipments to China have jumped 13-fold since May 2020 with cargo-tracking specialist Vortexa Analytics estimating that 90% of the cargoes over the past year to end-April were actually heavy oil from Venezuela. That's some 324,000 barrels per day (bpd), or nearly 61% of Venezuela's total oil exports.

New fuel taxes that kick in on June 12, however, will increase the cost of bitumen blend to importers by 40% to 50%, making it uneconomic and choking off flows. 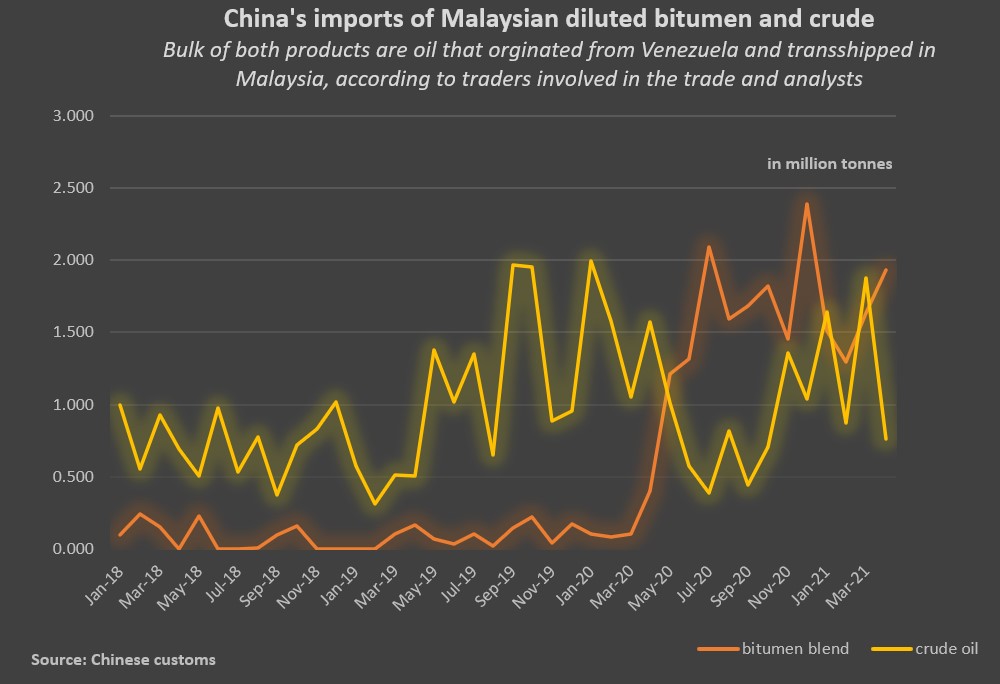 "While not all of the 350,000 to 400,000 bpd of the additional bitumen flowing into China will disappear overnight, a large proportion of it will be at risk," said Liu Yuntao, China analyst at consultancy Energy Aspects.

Top Chinese state oil buyer CNPC stopped loading Venezuelan oil from August 2019 due to U.S. sanctions, but private traders and refiners have been willing buyers, re-certifying and blending the oil as Malaysian following transshipments in Malaysian waters, according to data and industry sources.

Some Venezuelan oil has been relabelled as Malaysian by branding it as Singma or Mal Blend crudes, while some smaller refiners, facing crude oil import quota restrictions, have looked for a feedstock that requires no import quotas, say industry sources. https://reut.rs/3echHtD

"Bitumen blend fits perfectly into that category," said a Chinese trader involved in the business, who requested anonymity due to the sensitivity of the subject.

Demand has been fuelled by a strong recovery in Chinese consumption from the coronavirus slump since April 2020, and as the cut-off date for the new tax looms, imports have surged.

Vortexa Analytics estimated a record 4.3 million tonnes of Malaysian bitumen blend arrived in China in May, of which 2.7 million tonnes had been discharged by May 24.

That beats a previous record last December of 2.38 million tonnes reported by Chinese customs, and a pre-sanction high of 2.36 million tonnes for official Venezuelan crude in September 2016.

Zhou Mi, analyst with consultancy JLC, said around 2.4 million tonnes of Malaysian bitumen blend had been due to enter east China's Shandong province in May, China's independent refinery hub.

Some diverted cargoes to northeast China's Liaoning, another regular but less congested receiving area for these fuels, Li added.

China, which also takes oil from Iran, called on the United States last December to lift the sanctions on Venezuela, and has not taken any obvious measures to crack down on suspected imports from the South American nation. 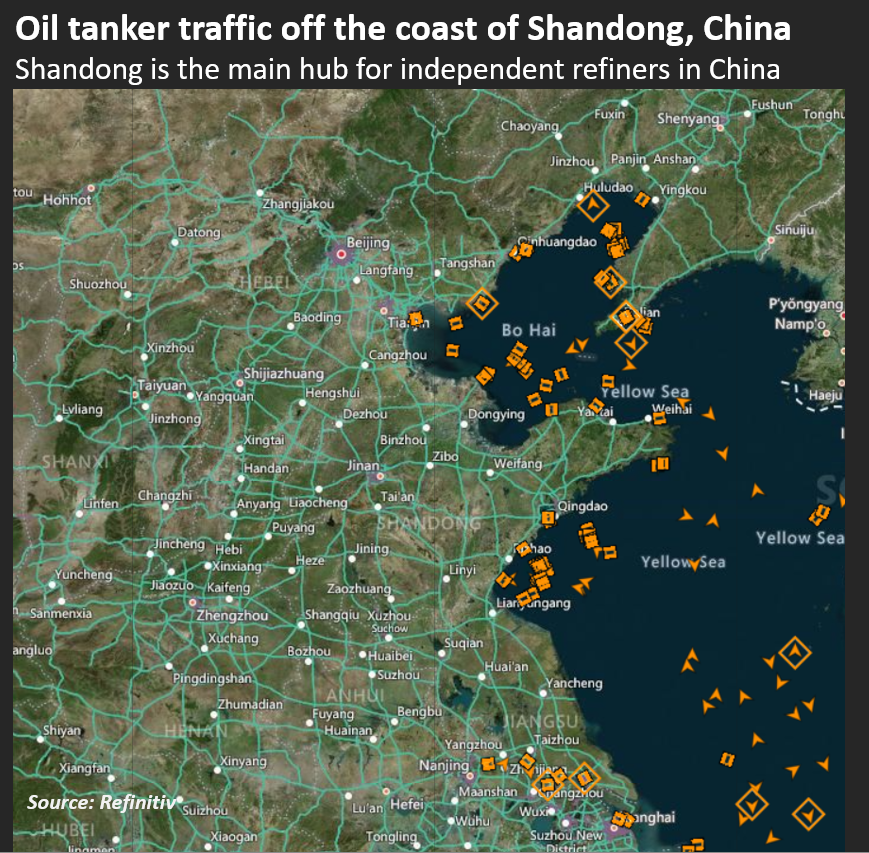 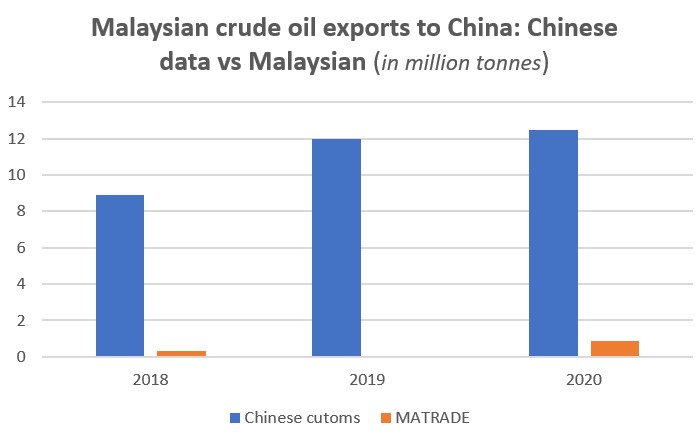 Malaysia produces only light, low-sulphur oils that are among "the world's most expensive", said a Malaysian oil industry official. Bitumen blend and Mal Blend, in contrast, are sold at deep discounts to global benchmark Brent oil.

With the new fuel tax starting on June 12, imports of Malaysian bitumen blend will face an extra $32 a barrel charge, making it largely uneconomic for processing, traders said. 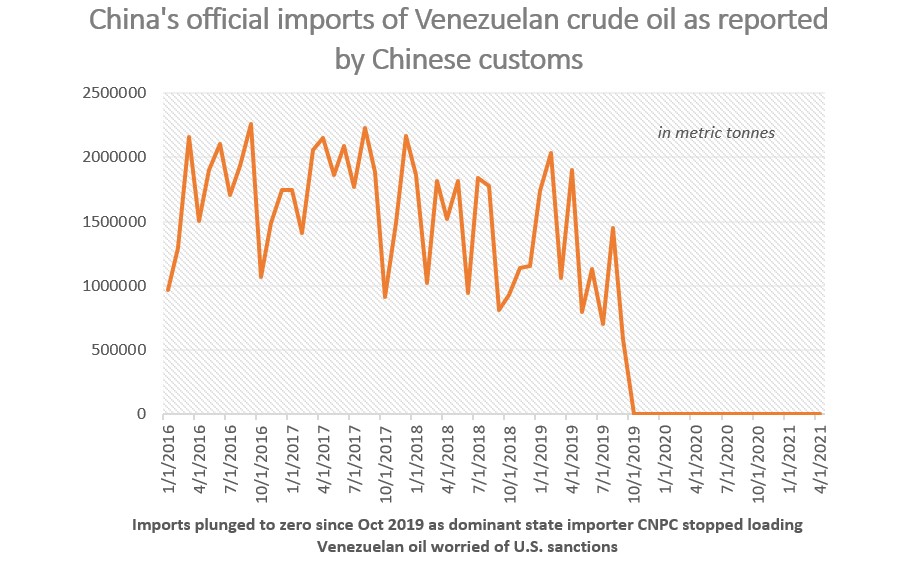 However, the impact on Venezuela's overall imports to China is not yet certain.

Importers may be forced to return to labelling Venezuelan fuel as crude blends, provided they possess or can acquire the required import quotas, traders said.

In Venezuela, some traders and shippers expressed concern over how the new tax will be implemented.

But loadings of Venezuelan oil bound for Asia have not stopped, even for those cargoes that will not make it by June 12, suggesting that charterers might try to declare most of them as crude blends, rather than bitumen mix, shipping sources said.

"The tax is simply impossible to pay. They will have to find a way around it," one shipper said.

Focused on energy-related sanctions, corruption and money laundering with 20 years of experience covering Latin America's oil and gas industries. Born in Venezuela and based in Houston, she is author of the book "Oro Rojo" about Venezuela's troubled state-run company PDVSA and Mom to three boys.