The logo of Italian payments group Nexi is pictured outside their headquarters in Milan, Italy, March 28, 2019. REUTERS/Alessandro Garofalo/File Photo

LONDON/NEW YORK, Aug 12 (Reuters) - Battered by a near 50% plunge in its shares over the last 12 months, Nexi (NEXII.MI), Europe's biggest payments processor, has not gone unnoticed.

Discussions between the U.S. buyout firm and Nexi Chief Executive Paolo Bertoluzzo faltered before the end of March due to differences on price for the 11 billion-euro, Milan-listed company, the sources said.

Shares in Nexi jumped 7.4% on the Reuters report and were temporarily suspended from trading. They were up 6% at 1344 GMT.

While it is not clear if potential buyers for Nexi will come knocking again, discussions among European and North American payments companies and potential acquirers are heating up again, bankers and industry experts said.

The gap in expectations over pricing is narrowing as company executives adjust to the idea that valuations, hit by the high-growth tech stock rout, won't return to previous peaks any time soon.

"Many companies which went public the last few years are realizing that being public isn't always a good thing, especially if they are subscale or have yet to achieve profitability," said Peter Christodoulo, partner at Francisco Partners.

While current disruption in debt capital markets may curtail some dealmaking, the more proactive attitude among sellers is expected to lead to an increase in deal volumes through the year-end and into 2023, the sources said.

Fiserv's chief strategy and growth officer, Byron Vielehr, said the company's strategy was focused on driving innovation for its clients but declined to comment on specific acquisitions.

BTRS Holdings Inc (BTRS.O) is among the dozen payments companies which went public in the United States between October 2020 and November 2021. The owner of business payments vendor Billtrust is now exploring options including a potential sale, sources told Reuters last month. read more

Paya did not respond to a request for comment.

Shares in BTRS and Paya have lost around 38% and 28%, respectively, over the past 12 months, although both have recovered ground amid reports they are reviewing options. read more

While payments providers which listed before 2020 have also suffered, the trend is accentuated among those who hit the public markets during the pandemic - either through a traditional initial public offering (IPO) or merging with a blank-check firm.

Investor sentiment has turned following a retreat from high-growth technology assets due to rising interest rates.

"Payments companies are fundamentally defensive and well positioned for an inflationary environment, so if public investors won't recognize the true value of some of these names, there will be private investors who will," said Jeff Paduch, managing partner at Advent International.

Paduch is a board member of Nexi, but declined comment on any aspect of the Italian company's operations.

Privately held firms have not been immune to the carnage, with both payments processor Stripe Inc and fintech Klarna Bank AB having to swallow significant valuation cuts.

Klarna, in particular, had its value slashed by more than 85% during its latest funding round announced on July 11, dropping to $6.7 billion from $46 billion. read more 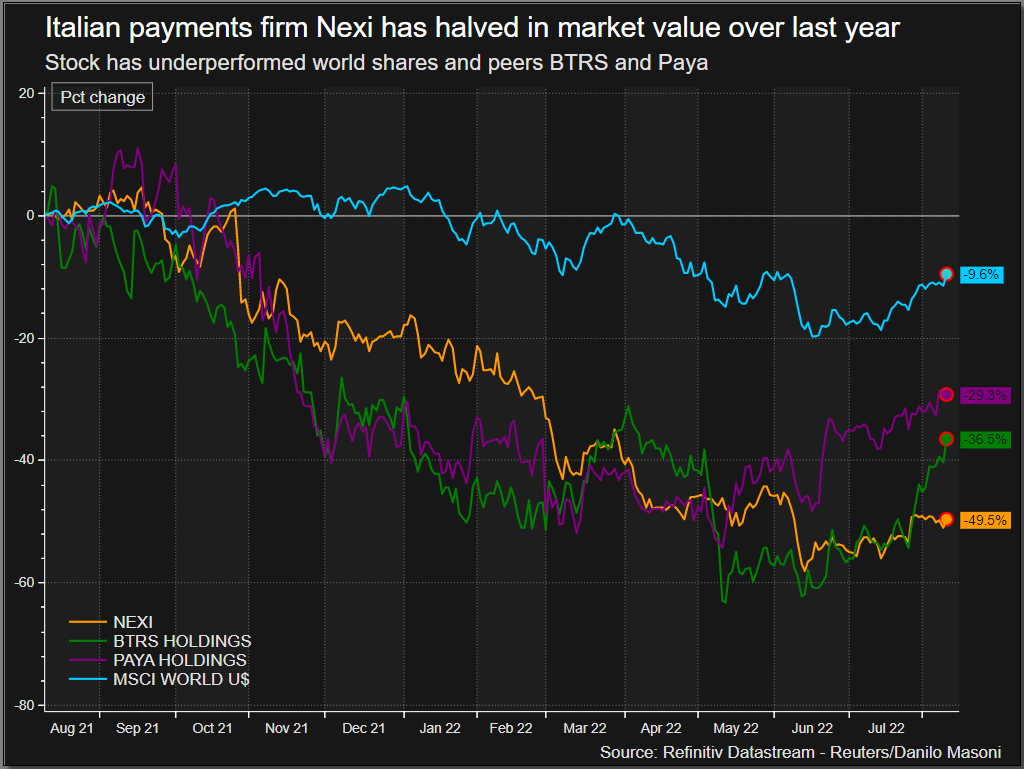 Private equity firms are eager buyers of payments businesses, having previously owned many such companies on both sides of the Atlantic.

Payments companies provide platforms for in-store or online purchases, charging a proportion of the value of each transaction.

Such a model gives companies a recession-proof image and a promising growth outlook: Digital wallet spending is expected to rise 83% by 2025, exceeding $10 trillion, according to consultancy Juniper Research.

Nearly $250 billion of payments deals have been clinched in the United States and Europe since 2017, based on Dealogic data, of which 48% involved buyout firms.

But payments M&A in the United States and Europe has dropped 48% so far this year compared to the same period in 2021, according to Dealogic.

Tougher financing markets have been a major deterrent for private equity deals this year, even in resilient industries such as payments.

But buyout firms could, ultimately, end up facilitating sector consolidation as many still own stakes after being unable to fully exit following an IPO or blank-check merger.

Bain Capital's venture arm and Accel-KKR are, respectively, the largest shareholders in BTRS Holding and Paymentus Holdings Inc (PAY.N), while Blackstone Inc (BX.N) is the second-largest shareholder in Paysafe Ltd (PSFE.N), based on Refinitiv Eikon data. 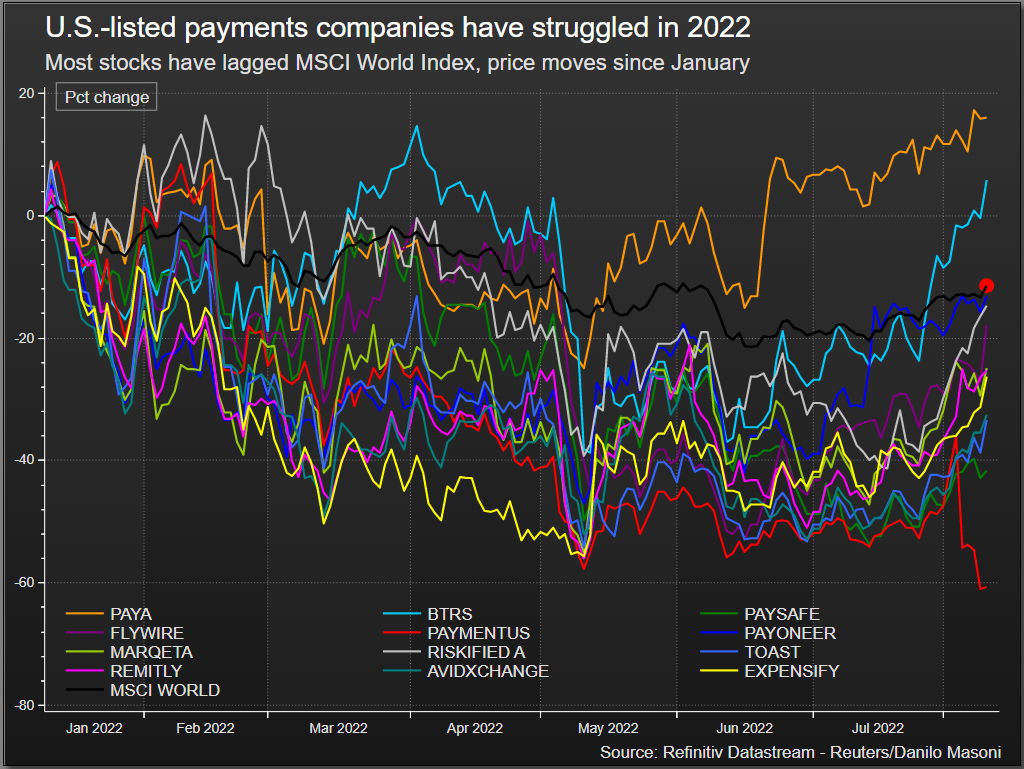