NEW YORK, June 14 (Reuters) - The U.S. debt ceiling comes into effect at the end of July, putting pressure on the Treasury to reduce its cash balance ahead of the deadline. That means more injections of cash into a financial system already awash with liquidity, a scenario that could further sink short-term rates and cause undue distortion in the overnight repurchase market.

WHAT IS THE DEBT CEILING?

The debt ceiling is the maximum amount the U.S. government can borrow, as directed by Congress, to meet its financial obligations. When the ceiling is reached, the Treasury cannot issue any more bills, bonds, or notes. It can only pay bills through tax revenues.

Congress previously agreed to suspend the limit through July 31, at which point the Treasury has only a few months of "extraordinary measures" before lawmakers must either raise the amount, or face consequences of technical default.

WHAT CAN THE TREASURY DO AHEAD OF THAT?

Run down its cash. It has a target cash balance of $450 billion at the so-called Treasury General Account (TGA) on July 31. As of June 9, the Treasury's cash balance was $674 billion, data from financial research firm Wrightson ICAP, down from $1.8 trillion last October. 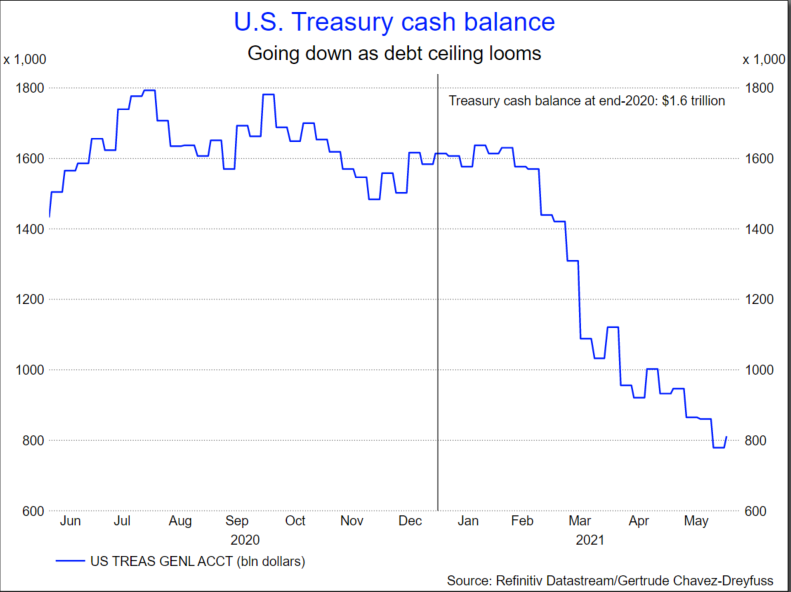 It is not allowed to run up its cash balances ahead of the debt ceiling, analysts said, because doing so is viewed as circumventing the borrowing limit.

It has more than a month to pare back its cash, unless Congress raises or suspends the U.S. debt limit. If Congress does not, the Treasury has certain extraordinary measures at its disposal.

WHERE DOES THAT CASH GO?

As the Treasury spends money from its general account, the cash ends up on bank balance sheets, often in the form of money market funds. Wrightson said it expects bank reserves to average between $3.8 to $4.0 trillion in June. read more

With front money market yields so low – in some cases on the cusp of falling below zero , -- investors have opted to place cash with the Fed's reverse repurchase facility, which pays zero interest rates.

On Thursday, the reverse repo volume hit a record $535 billion.

WHAT CAN BE DONE TO ALLEVIATE MARKET STRESS?

Market participants see a possibility that the Fed, at its next policy meeting, raises the reverse repo rate and the interest on excess reserves (IOER), currently at 0.10%, two rates that influence the effective fed funds to trade within the target range. That should help lift repo and bill rates.

(This story refiles to add “U.S.” in headline)