A security camera is seen next to signage outside of the New York Stock Exchange (NYSE) in New York City, New York, U.S., June 28, 2021. REUTERS/Andrew Kelly

June 30 (Reuters) - The S&P 500 hovered near a record high on Wednesday as U.S. private payrolls increased in June even as hiring slowed, with Wall Street's major averages set to end their fifth straight quarter of gains.

The ADP National Employment Report showed private payrolls increased by 692,000 jobs this month, down from 886,000 additions in May as companies scrambled for workers to meet a surge in demand amid a rapidly reopening economy. read more

The Labor Department's more comprehensive and closely watched employment data for June is due on Friday and market participants fear a strong reading could force the U.S. Federal Reserve to pare back its ultra-loose monetary policy.

"The monthly Bureau of Labor Statistics report has disappointed for the last two months. A third disappointment would cement the fact that the economic gains are starting to lose momentum," said John Brady, senior vice president at R.J. O'Brien & Associates in Chicago.

Prospects of a transitory spike in inflation have pushed the benchmark S&P 500 (.SPX) and the Nasdaq (.IXIC) to record highs in recent sessions, helped by a comeback in tech-heavy growth stocks.

The S&P 500 has climbed about 14.3% in the first half of the year and is set for its second best first-half performance since 1998, with energy, financials (.SPSY), real estate (.SPLRCR) and communication services (.SPLRCL) stocks notching the best performance at the sectoral level.

"The path of least resistance seems to be higher for the markets on the back of central bank liquidity tailwind, fiscal stimulus, pent up savings ... ," said Todd Lowenstein, equity strategist at the Private Bank at Union Bank in Santa Barbara, California.

Micron Technology (MU.O) rose 1.2% as BMO upgraded the stock to "outperform" from "market perform" on continued supply-demand imbalance in 2022. The chipmaker is expected to post quarterly results after markets close. 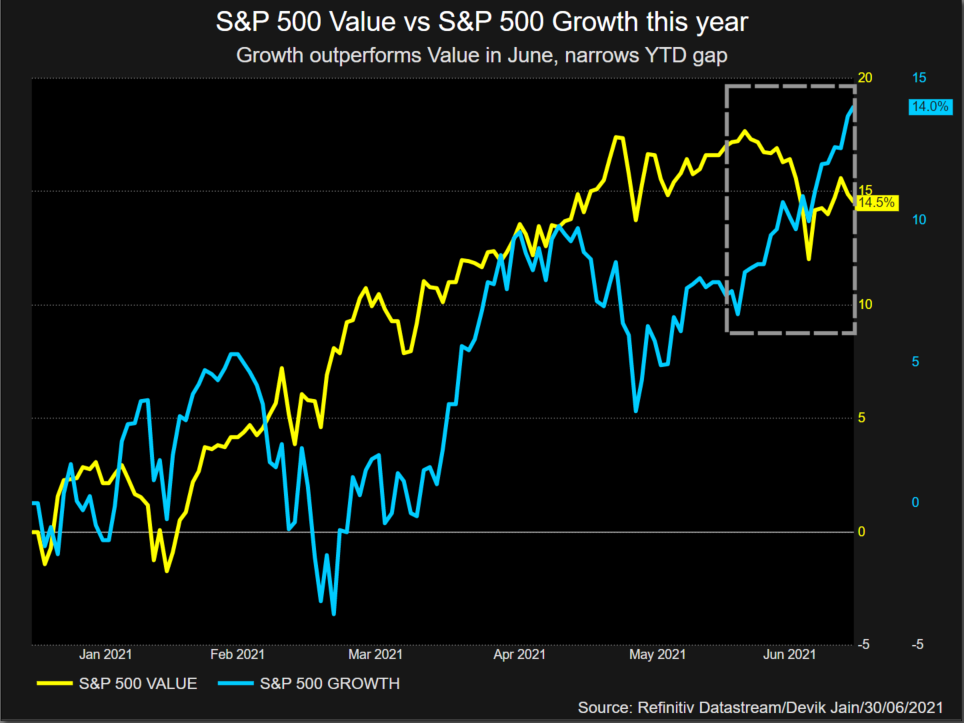 Reporting by Devik Jain and Medha Singh in Bengaluru; Editing by Arun Koyyur and Maju Samuel