Shoppers look at merchandise in the Swatch store in Times Square in New York City, U.S., May 3, 2021. REUTERS/Brendan McDermid

LONDON, June 25 (Reuters) - BofA expects U.S. inflation to remain elevated for two to four years, against a rising perception of it being transitory, and said that only a financial market crash would prevent central banks from tightening policy in the next six months.

It was "fascinating so many deem inflation as transitory when stimulus, economic growth, asset/commodity/housing inflations (are) deemed permanent", the investment bank's top strategist Michael Hartnett said in a note on Friday.

Global stocks were holding near record highs hours ahead of the reading of May core personal consumption expenditures index, an inflation gauge tracked closely by the Fed. The gauge is estimated to rise 3.4% year-on-year.

U.S. Federal Reserve Chairman Jerome Powell vowed on Tuesday not to raise interest rates too quickly based only on the fear of coming inflation. The comments were seen as a move to soothe investor nerves after a hawkish monetary policy meeting last week suggested officials believed interest rates would rise as soon as 2023, perhaps a year earlier than anticipated.

BofA clients were still heavily invested in equities, with cash allocations well below long-term averages at 11.2%.

In the week to Wednesday, investors pumped $7 billion into equities and $9.9 billion into bond funds, while pulling $53.5 billion from cash funds, BofA calculated, using EPFR data.

Within equities, emerging market funds saw outflows of $1.6 billion - the largest since September 2020.

As the first half of 2021 is drawing to close, Hartnett said higher inflation, hawkish central banks and weaker growth are the key themes to watch out for in the second half. 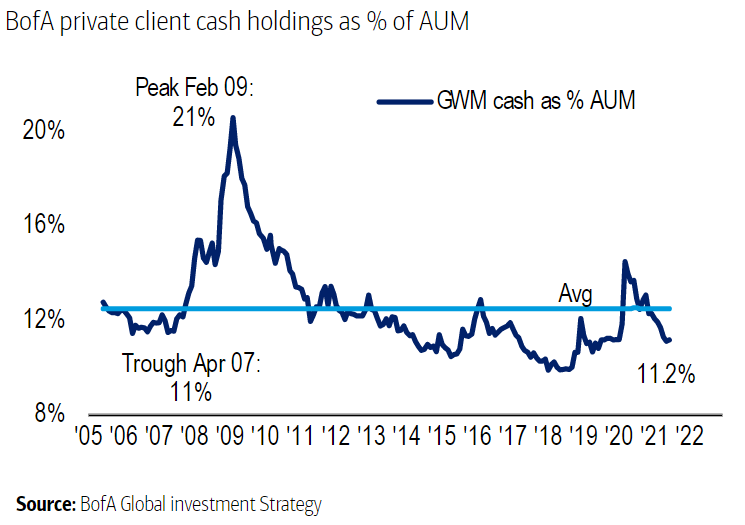