LONDON, July 1 (Reuters) - A hawkish turn by the Federal Reserve has woken up world markets to the prospect that policymakers might soon start withdrawing monetary and fiscal stimulus -- and the risk of too-hasty action that could choke off the economic recovery before it is secured.

Fed officials have brought forward expectations for U.S. interest rate rises to 2023 from 2024 and opened talks on how to end crisis-era bond buying.

"It's important to acknowledge that it's better to keep in place monetary stimulus too long rather than taking it away too early," said Zurich Insurance Group's chief market strategist Guy Miller.

"If inflation picks up and the economy runs too hot, the ECB will be well-positioned to tackle it. If you take stimulus away too early, the situation is going to become very difficult."

The ECB lifted rates in April and July 2011, as a debt crisis raged, just to cut them four months later.

The Fed started raising rates in 2015, a move many analysts now view as a policy error that unnecessarily stalled the post-crisis recovery. 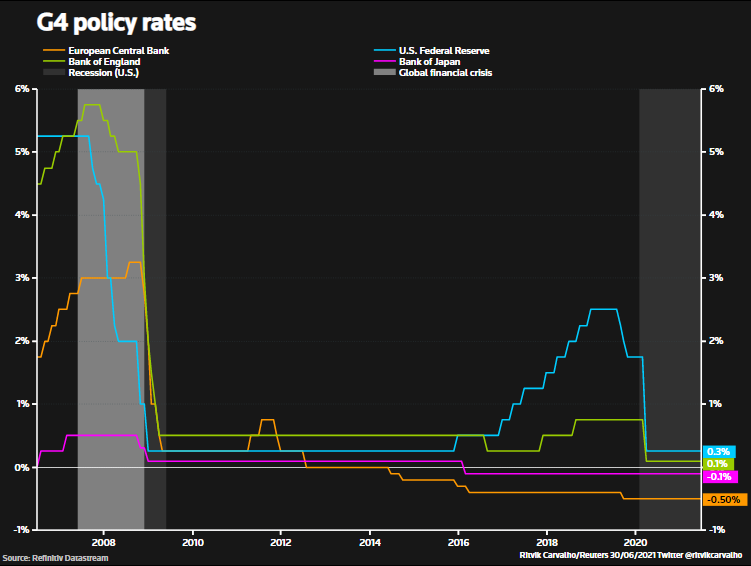 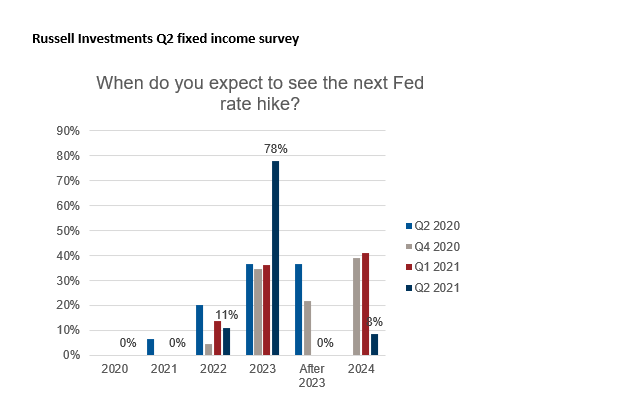 A Russell Investments second-quarter survey of fund managers last week showed 50% of 72 respondents expect the Fed to deliver its inflation promise, down about 10 percentage points from Q1. They expect higher inflation and Treasury yields.

"There are parallels with the past and that's very useful for markets right now," said Gerard Fitzpatrick, global head of fixed income at Russell Investments.

"Concern about the Fed hiking extra early, we're already starting to see a sense of that coming through," he added, noting rising economic growth and inflation.

Key measures of business activity in the United States and Europe are at their highest in years. Inflation too is rearing its head, judging by the latest 5% U.S. inflation print.

One concern is that a less dovish Fed could pave the way for other central banks to follow.

But perhaps it's the lessons of withdrawing fiscal stimulus too soon that policymakers really need to heed. 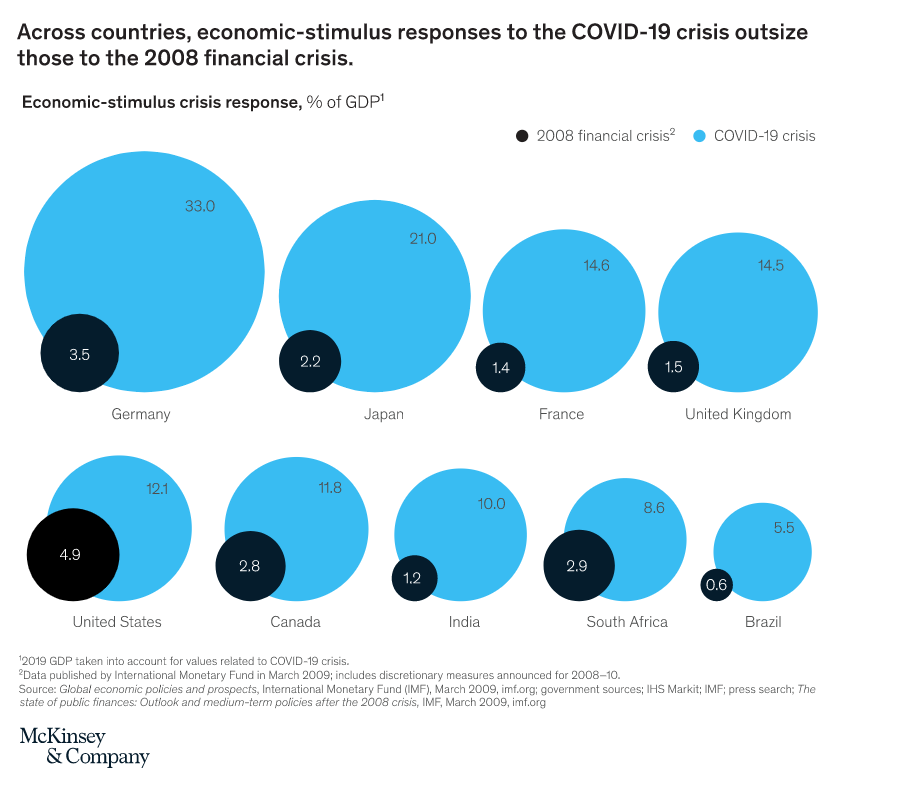 Government stimulus after the financial crisis was small in comparison to that unleashed after COVID-19. In some places like Europe, stimulus was then quickly withdrawn as austerity prevailed.

Governments allocated $10 trillion for stimulus in just two months last year and for some countries, their response as a percentage of GDP was nearly 10 times what it was post-2008, according to McKinsey & Company.

David Riley, chief investment strategist at BlueBay Asset Management, said the mistake after the financial crisis was dialling back fiscal support too soon, leaving central banks to carry the burden of bolstering economies.

He added that central banks were right to starting thinking about scaling back hefty monetary stimulus. 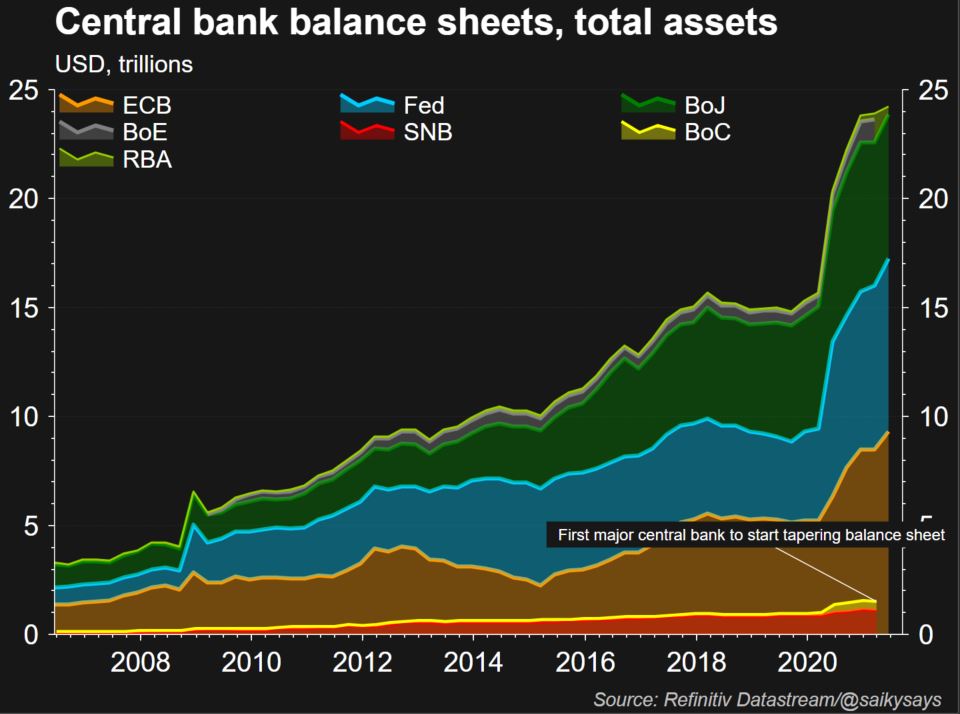 "The main concern I have is that it (tapering) is taken by governments as a sign that they can't provide more fiscal support as the monetary policy backstop gets withdrawn and they start worrying about bond vigilantes," he said, referring to investors punishing profligate governments by pushing up borrowing costs in bond markets.

"The risk is we get a return to austerity too soon."

A $559 billion U.S. infrastructure deal last week was smaller than anticipated, with strong opposition from Republicans likely to limit plans for further stimulus.

Germany's September election could also be key. The ruling conservative Christian Democrats (CDU), now leading in the polls, are promising tight public finances, although economists believe Germany will be unable to balance its books soon.

Morgan Stanley's head of European economics Jacob Nell said the premature withdrawal of fiscal support that ECB chief Christine Lagarde has warned about is just what the CDU manifesto calls for.

"We think they will negotiate this away in the coalition talks after the election, but you know there is a live risk of a rapid return to fiscal consolidation," he said.

Overall, however, analysts pointed to signs that governments were determined to keep support flowing: EU fiscal rules have been suspended again this year and BofA estimates that the U.S. government will spend $879 million every hour in 2021.

While the Bank for International Settlements warned in its annual report this week about "daunting challenges" ahead for policymakers when they eventually seek to normalise policy, for now the flow of cheap central bank money gives major economies a chance to fund recoveries at relatively low cost.

"Policymakers have learned from their previous mistakes," said Zurich's Miller.

Reporting by Dhara Ranasinghe and Sujata Rao in London; Additional reporting by Stefano Rebaudo in Milan; Editing by Mark John and Catherine Evans