BENGALURU, May 25 (Reuters) - Residential property markets in major economies will soar this year on huge monetary and fiscal support and amid a recovery from the pandemic, according to Reuters polls, which showed risks for prices skewed to the upside.

Average home selling prices have hit eye-watering levels in 2021 in some countries. That trend is expected to continue, driven by low mortgage rates, swift vaccine rollouts and the easing of restrictions after deep pandemic-induced recessions last year.

The global boom in property prices comes alongside soaring stock markets, which quickly bounced back from a slump on pandemic-driven economic damage and devastating job losses, to focus on unprecedented stimulus and the recovery at hand.

"Consumer confidence has risen strongly due to the success of vaccination programmes and survey evidence suggests the pandemic has led to more people looking to move home. Supply shortages point to upward pressure on prices in the short term," said Andrew Harvey, senior economist at Nationwide.

Almost 60% of analysts, or 55 of 92, who responded to a separate question on property markets across the globe, said risks to the outlook were skewed to the upside over the coming year. The remaining 37 said more to the downside. 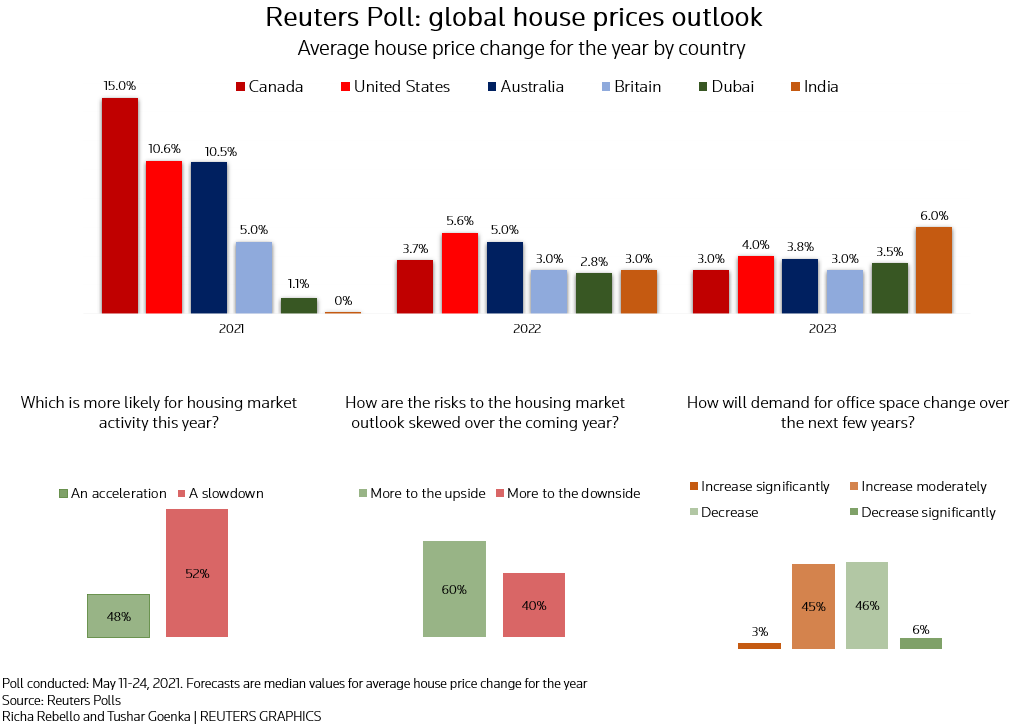 The trend in the latest Reuters polls showed expectations for strong gains this year followed by slower appreciation in the next few years, moderated by increased supply, lower immigration and as affordability becomes a bigger constraint.

While there has been higher demand for both single- and multi-family homes in cities and towns, when asked how demand for office space would change more broadly over the next few years, respondents were split.

"The enforced remote-working experiment of recent months will cause a dramatic demand shift in the office sector, with as many as 50% of office-based employees working from home at least once a week," said Matthew Pointon, senior property economist at Capital Economics.

"Even with a heroic supply response through substantial conversions and demolitions, we expect vacancy to rise markedly in the next five years and still be elevated in 2030."

House prices in Australia and Canada were forecast to gain in double-digits this year, while in Dubai they were expected to rise for the first time in six years.

Britain's housing boom was set to roll on too on ongoing government support alongside increased demand for more living space.

U.S. house prices were expected to race ahead, rising at double the rate expected in February, driven by low supply and cushioned by hefty spending by the White House administration and near-zero interest rates.

The outlook for the Indian housing market was one notable exception to the global trend.

Indian house prices were predicted to stagnate this year, hurt by a devastating second wave of the coronavirus which has crushed demand and offset government tax rebates and incentives for property developers.

India is currently accounting for one in every three coronavirus-related deaths reported worldwide each day, according to a Reuters tally. read more

"Normalcy in mobility and housing would remain muted over the next 18 months. But the larger issue of income and jobs also remains muted," said Ashish Nainan, assistant professor at Saintgits said of the Indian market.

"While the first wave provided some relief to the sector, post the second wave, buyers would become fence-sitters for an extended period."

(Other stories from the Reuters housing market polls:)

Reporting by Shrutee Sarkar in BENGALURU; Additional reporting and polling by correspondents in BENGALURU and LONDON; Editing by Rahul Karunakar