A look at the day ahead from Dhara Ranasinghe.

The U.S. Federal Reserve is sticking with the mantra that inflation is transitory and there's no rush to tighten policy but some others are feeling uneasy.

On Thursday, Michael Saunders became the second Bank of England rate setter in two days to signal it may be time to consider reining in stimulus as inflation ramps up. Earlier this week central banks in Canada and New Zealand took steps towards unwinding post-crisis stimulus. read more

No surprise then that two-year gilt yields shot up 6 basis points after Thursday's BoE comments in the biggest one-day jump since February. In contrast, U.S. bond yields continue to be pinned down by Fed chief Jerome Powell's dovish rhetoric.

But another run of strong data could test the Fed's resolve too; figures due later this session are expected to see U.S. June retail sales rose in June after declining in May.

In the meantime, equity markets are struggling to hold their nerve in the face of a continued surge in coronavirus infections globally.

The dollar was headed for its best weekly gain in about a month, supported by investors' drift toward safety.

Oil prices were a touch weaker, staying under pressure after a compromise deal between leading OPEC producers and a surprisingly poor weekly reading on U.S. fuel demand.

Key developments that should provide more direction to markets on Friday: 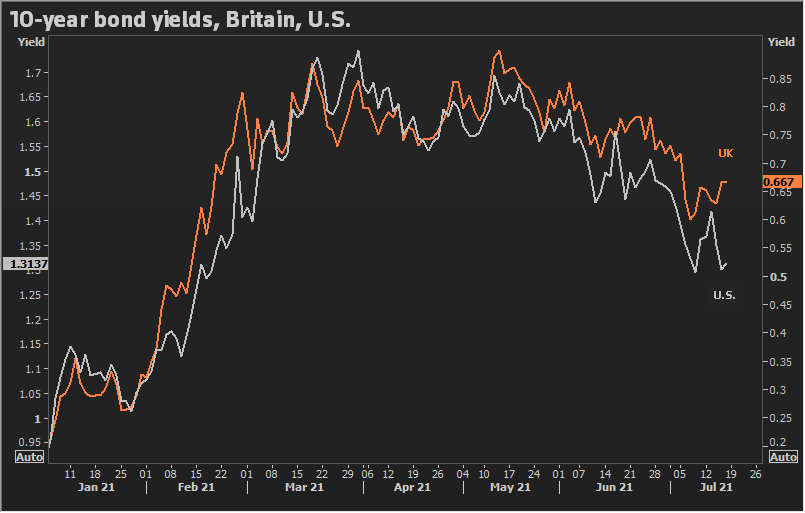