June 22 (Reuters) - The Nasdaq ended at a record high on Tuesday, lifted by Amazon, Microsoft and other top-shelf tech companies as investors shifted their focus to growth stocks.

Amazon had over $5.6 billion in total online sales in the United States on the first day of its Prime promotional event, according to Adobe Digital Economy Index. read more

In a congressional hearing, meanwhile, Federal Reserve Chair Jerome Powell reaffirmed the U.S. central bank's intent to encourage a "broad and inclusive" recovery of the job market and not to raise interest rates too quickly based only on the fear of coming inflation. read more

So-called value stocks, expected to benefit from the economic recovery, have outperformed in 2021, while growth stocks, including major tech names like Apple (AAPL.O) and Nvidia (NVDA.O), have rallied since the Fed last week took a stance on future rate hikes viewed by many as more aggressive than expected.

The S&P growth index (.IGX) has added almost 2% since before the Fed last Wednesday projected an accelerated timetable for interest rate increases, compared with a drop of almost 2% in the value index (.IVX).

"The market was caught off guard regarding the Fed’s hawkish commentary, and that’s 100% of what is happening," said Andrew Mies, chief investment officer of 6 Meridian. "All the smart people were surprised about how hawkish the Fed was, and now they are adjusting their portfolios."

Nine of the 11 major S&P sector indexes rose, with consumer discretionary (.SPLRC) and tech (.SPLRCT) the biggest gainers, each up about 1%. 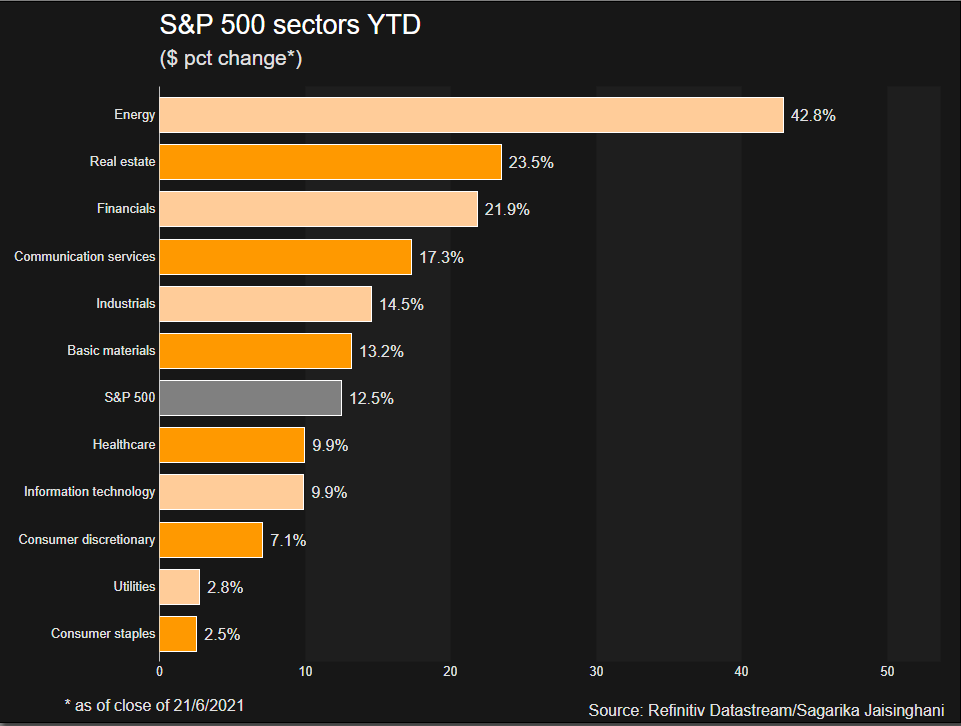 GameStop (GME.N) jumped 10% after the videogame retailer said it raised over $1 billion in its latest share offering, cashing in further on this year's Reddit-driven surge in its stock price. read more

Sanderson Farms (SAFM.O) rallied about 10% to a record high after J.P. Morgan raised its price target on the stock after a source told Reuters that the poultry producer was exploring a sale.

Twitter (TWTR.N) ended almost 3% higher after it said it will seek applications from users to test new content subscription and ticketing features, as the social platform works to build more ways for users to earn money. read more

Moderna Inc (MRNA.O) rose 6.3% after the European Union decided to take up an option under a supply contract with the drugmaker that allows the bloc to order 150 million additional COVID-19 vaccines. read more

Advancing issues outnumbered declining ones on the NYSE by a 1.26-to-1 ratio; on Nasdaq, a 1.08-to-1 ratio favored advancers.

Volume on U.S. exchanges was 9.5 billion shares, compared with the 11.1 billion average over the last 20 trading days.