July 8 (Reuters) - Global markets won't have a violent "taper-tantrum" like they did in 2013 even as though U.S. Federal Reserve is expected to discuss tapering of asset purchases at its annual gathering at Jackson Hole in August, three strategists at asset management firms said.

The Fed's scaling back - or "tapering" - of its quantitative easing programme in 2013 had triggered a market panic when bond yields rocketed higher and stock prices dropped.

Inflation is likely to be "mostly transitory," and is expected to moderate down to pre-crisis levels in 2022, the strategists told the Reuters Global Markets Forum this week.

That will keep aggressive action from major central banks at bay, they said.

"The Fed has done a fantastic job communicating it's policy stance and future actions, so I don't think there will be any uncertainty," Chao said.

"The (Fed) minutes did not seem to change anyone's mind about when tapering will start," said Vail, whose firm manages assets worth $282.2 billion.

Assalin said there were several important differences between now and 2013, including lighter and less concentrated investor positioning in EM debt and currencies, stronger external balances and buffers, and a better-synced global economy with Fed policies.

"All in all, we expect a much smaller impact this time around," Assalin said. 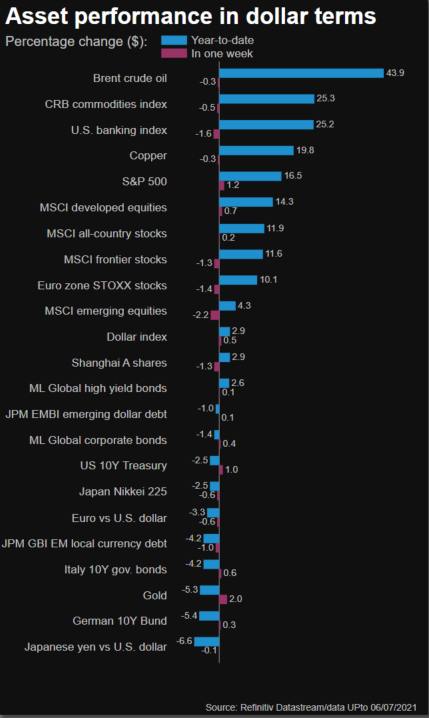 Both Vail and Chao expected U.S. equities to end 2021 marginally above current levels, and the dollar to "drift back" to around its early-June levels of 110 versus the Japanese yen and 1.21 versus euro. (.SPX), (.DXY), ,

Some of the largest U.S. asset managers expect bond yields to move higher in the second half of this year, despite the recent slide in Treasury yields, which they see as a temporary move. read more

In emerging nations, markets may see some volatility as investors "grapple" with a tightening U.S. monetary policy, but Chao expected taper-talk to be a "non-event."

Reporting by Divya Chowdhury in Mumbai and Lisa Pauline Mattackal in Bengaluru; Editing by Hugh Lawson