SEOUL, July 19 (Reuters) - South Korea is set to be the first Asian economy to raise interest rates from pandemic-era lows as its hawkish, outgoing central bank governor steps up efforts to stamp out any incipient property bubbles or household debt stress.

Bank of Korea Lee Ju-yeol surprised financial markets last week, when policy rates were kept at record lows but he signalled they could rise as early as August, at the next policy review. read more

Even though Asia's fourth-largest economy has recovered rapidly and inflation is running above target, it is battling record COVID-19 cases as the more infectious Delta variant spreads, triggering strict measures and a semi-lockdown in the Seoul area. read more

"It's one of those rare times where taming home prices has become more important, both politically and on economic fronts," said Yoon Yeo-sam, an analyst at Meritz Securities.

"Nothing the government did for the past few years could stop home price surge, and time is running out both for Lee and the government."

Lee's term as governor ends in March 2022, just weeks before President Moon Jae-in also steps down. During his eight years at the helm, the hawkish-leaning Lee has struggled to contain debt levels in a country with a proclivity for risk-taking. read more

The Bank of Korea (BOK) cut the policy rate (KROCRT=ECI) by 75 basis points last year to a record low 0.5% to support the economy.

Those low interest rates spurred heavy borrowing by households. Household debt was up to 1,765 trillion won ($1.55 trillion) in March, of which mortgages comprised 931 trillion won.

The cheap cash has further fuelled speculation in property, stock and cryptocurrency markets. House prices have soared despite a slew of measures such as taxes and lending restrictions, prompting the BOK to warn in June that financial vulnerability of local asset and credit markets was at its highest since the global financial crisis of 2008.

Analysts now reckon interest rates are too low for an economy projected to grow 4% this year, its fastest since 2010. Inflation too is running well above the central bank's 2% target.

"Lee clearly has his retirement timetable in mind. He doesn't have much time left to really do what he wants, which is to bring debt growth and home prices down, that's the legacy he wants to go home with," said Kong Dong-rak, an economist at Daishin Securities.

"The longer he waits, the harder it would be for him to go ahead with tightening," he said, citing the distraction of the Presidential election in March as a reason.

If the BOK raises rates at its end-August policy meeting, it will leapfrog even the Reserve Bank of New Zealand, the most hawkish of developed world central banks. read more

Economists are divided, however, over how far Lee will go as the central bank balances financial risks against economic growth.

Yoon of Meritz Securities said Lee's recent remarks appeared more hawkish than ever, and "at least one hike seems to be warranted, but further tightening could be difficult depending on the strength of the recovery from this outbreak".

The coronavirus variant is bad news for an economy in which only about 30% of the nation's population has been vaccinated, and comes at a time when reopening western economies could reduce demand for Korea's electronics exports. read more

Yet household debt has ballooned to around 175% of disposable income. The median apartment price in Seoul has risen to 1.14 billion won ($1 million) as of June, up about 70% since Moon took office in 2017, data from KB Bank shows. read more 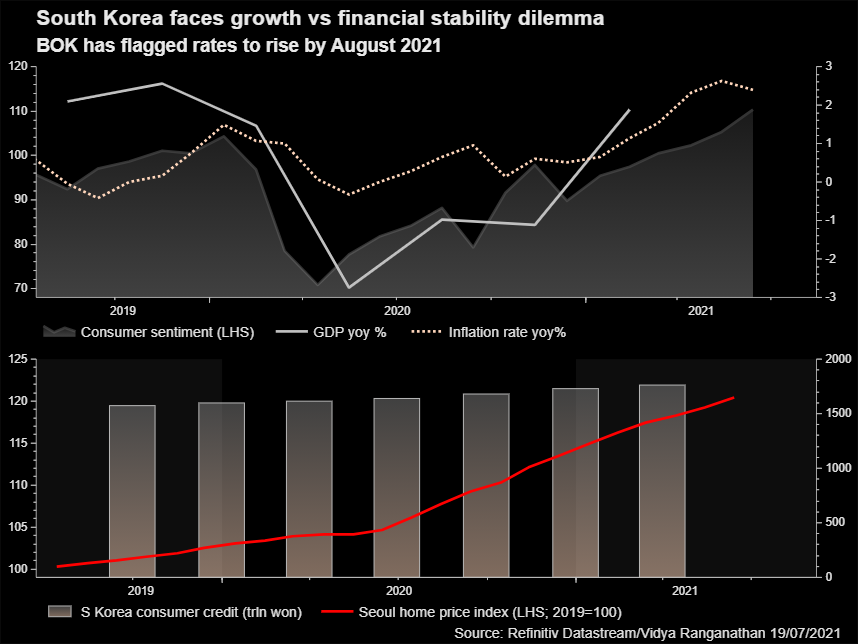 "The BOK's reaction function has undergone a dramatic shift, and it now appears to be prioritising keeping housing markets in check," Nomura analysts said in a note, as they forecast two rate rises this year, and one more in 2022.

"August lift-off," HSBC said, bringing forward their rate rise call from the fourth quarter on the view that the BOK was prioritising financial stability.

Analysts at Morgan Stanley expect the first rate rise in October, and say "our policy rate predictions should be seen as gradual policy normalisation rather than policy tightening."

"The BOK is prepared to start policy normalisation and one or two hikes does not qualify as tightening, in its view," Kim Jin-wook, an economist at Citigroup said in a note, while bringing forward his rate hike forecast to August from October.