LONDON, June 9 (Reuters) - As grandees of the investment world fall over themselves to warn of long-absent inflation up ahead, financial markets appear ever calmer about the risks of that new regime unfolding.

Is the post-pandemic inflation scare over already?

Thursday will likely see the United States record the highest consumer price inflation rate in 13 years - just shy of 5% - and the fastest rate since 1993 if food and energy prices are cut out.

Yet, bond and stock markets have been buoyant for weeks - seemingly comfortable with Federal Reserve signalling this is temporary and possibly even marking a peak of distorted 'base effects' measured against price falls as the pandemic hit a year ago. The past 12 months of COVID-related disruption has led to supply bottlenecks and jobs market distortions that may persist a little longer, but policymakers reckon these too will subside.

Echoing that mantra from major central banks, the World Bank on Tuesday said the 1% jump in world inflation forecast for this year wouldn't warrant a policy change as long as inflation expectations stay under wraps. And U.S. market-based measures of these, although at their highest in years, have been slipping back for weeks - well below peaks over a month ago.

Red-hot commodity markets, both affected by and also driving many of these base effects and bottlenecks, are showing signs of cresting too - or pausing at the very least.

Yet, even if that's true, markets also seem impressively zen amid alarms raised over a more durable end to decades of structurally low inflation - due to anything from changing demographics, retreating globalisation, shifting central bank mandates and even the purge on carbon to fight climate change.

That's a lot of cogent inflation arguments to face down - complicating the puzzle and raising a question about whether calls for "The Great Reflation", "New Nominal" or 'Roaring Twenties" are already the overwhelming consensus and priced.

Some investors reckon it's simply to early to tell and markets are reluctant to bet the farm yet on an unprecedented horizon impossible to predict with any accuracy.

"There should be a dramatic pause here. Because no one knows," said Jim Wood-Smith at Hawksmoor Investment Management, adding few market or investment professionals now working have seen anything other than falling inflation expectations for much of the past 4 decades.

And if that's an honest appraisal of the doubts, it makes little sense for central banks to rush to pull the plug now - having equated their policy support to a war footing dealing with the biggest shock to global economy since the 1940s. 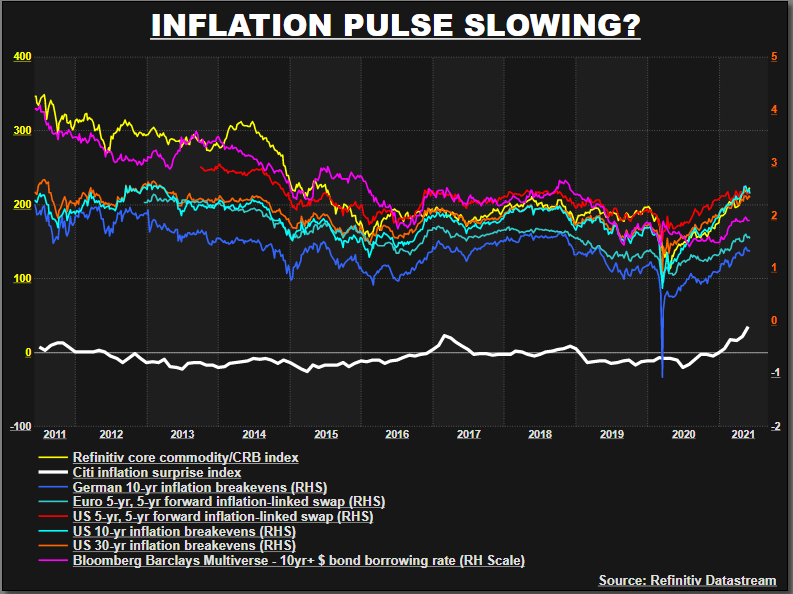 For all their eye-catching red flags, investment banks are just hedging their bets to some degree.

Deutsche Bank's economists this week said their central scenario was that the inflation resurgence would be temporary and benign. But in a new series dubbed "What's in the tails?" they said they felt compelled to warn about the chance their forecasts are wrong.

"We are witnessing the most important shift in global macro policy since the Reagan/Volcker axis 40 years ago," Deutsche's David Folkerts-Landau, Peter Hooper and Jim Reid wrote, adding the fear is the Fed's new inflation averaging target will make it too slow act if necessary, leading to later and harsher tightening and a deeper recession with debt distress.

"It is a scary thought that just as inflation is being deprioritised, fiscal and monetary policy is being coordinated in ways the world has never seen," they said. Given the scale of debt accumulated during the pandemic, "neglecting inflation leaves global economies sitting on a time bomb."

Others already have a new inflation regime as a base case.

Pascal Blanque, chief investment officer at Europe's biggest asset manager Amundi, last week restated his central belief that we are heading "back to the 1970s" in terms of supply shocks seeding a mix of inflation and spluttering growth and much higher volatility in interest rates.

One of the reasons he claimed is the public, political and policymaking desire for higher inflation.

Larry Fink, chief executive of the world's biggest asset manager BlackRock, also struck a 1970s theme by warning inflation may result from yet another massive energy-related disruption and asked whether people would accept that now as a price for rushing an exit from carbon.

"If we rush this and if our solution is entirely just to get a green world, we're going to have much higher inflation, because we do not have the technology to do all this yet to have it equivalent to the cheapness of hydrocarbons," he said.

However, 'ifs' and 'buts' are not forecasts. And sub-2.5% inflation expectations over 5- and 10-year bond market horizons show that current CPI prints are still seen as a blip over time.

Morgan Stanley, for one, talks of U.S. CPI undershooting already elevated consensus forecasts over the next three months, advising clients to “fade the hysteria” and warning that below-forecast inflation could well be the ‘pain trade’ of the year. 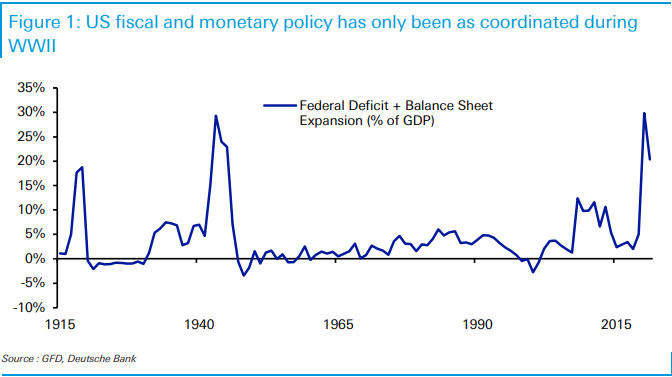 The author is editor-at-large for finance and markets at Reuters News. Any views expressed here are his own.

Corporate diversity has become the most common type of sustainability metric used in setting executive pay, a new study found, as companies look to increase the share of women and minorities in their workforces.