Vapor is released into the sky at a refinery in Wilmington, California March 24, 2012. REUTERS/Bret Hartman

Investors are demanding more information from companies on everything from carbon emissions to boardroom diversity amid a growing belief that companies which perform well on ESG issues will have a stronger performance financially over time.

To help rank companies' efforts, a number of data providers, including Refinitiv, assess corporate disclosures and other data sources. Investors can use them as a starting point for their own analysis before deciding whether to invest. 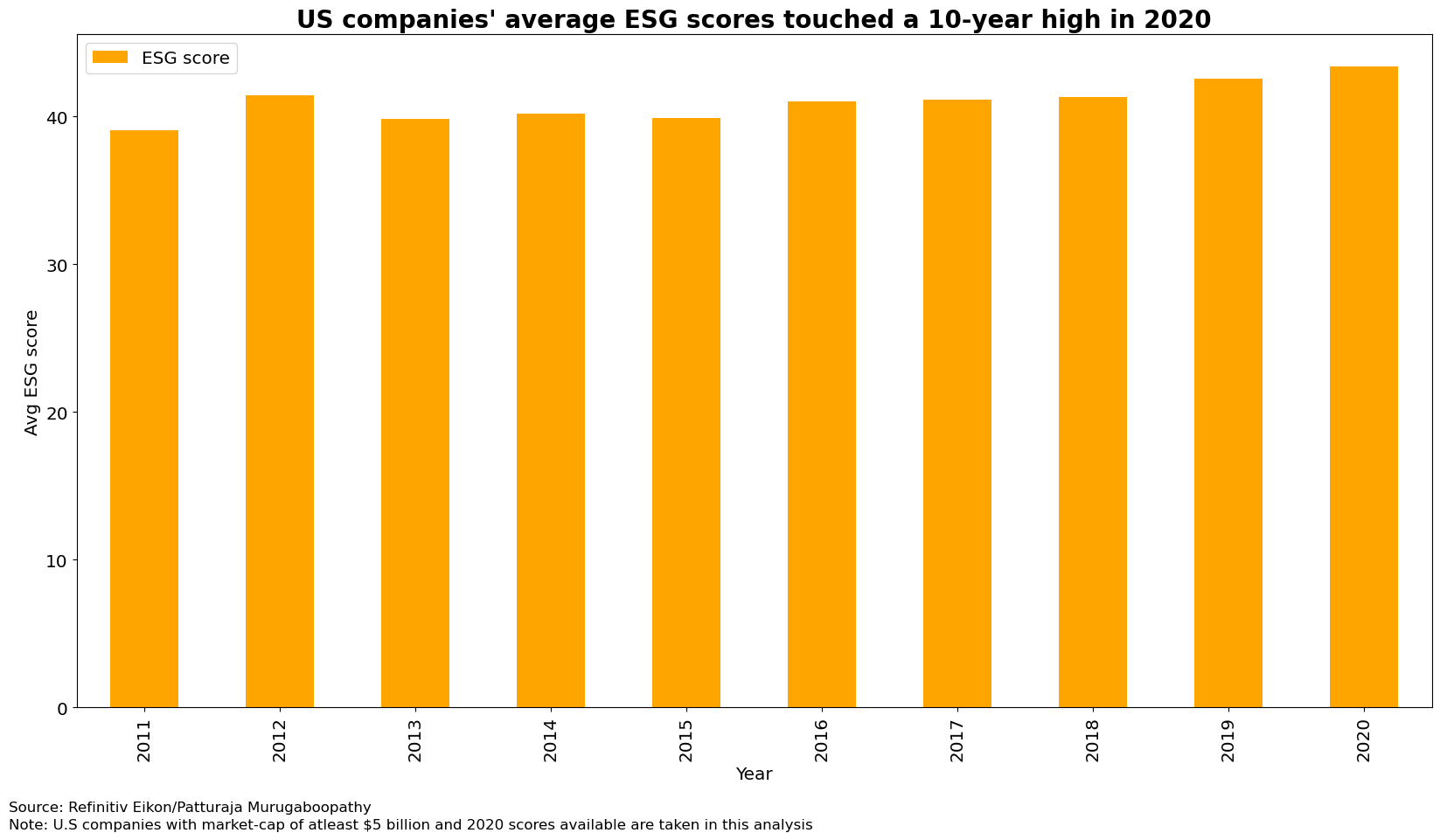 The Refinitiv score ranges from 0 to 100, with a higher score indicating a stronger performance both on ESG-related disclosures and an absence of events that Refinitiv assesses as being negative for the company concerned.

Fionna Ross, senior ESG analyst at Aberdeen Standard Investments, said: "Since the beginning of this year alone, we have been contacted by several U.S.-based companies asking for our input as they navigate through publishing their first sustainability reports."

Pressure on companies to disclose more information relating to sustainability is increasing.

International accounting body the IFRS Foundation, for example, is planning to set out plans for rules to govern company disclosures of risks from climate change. Regulators and policymakers in the United States and Europe are looking to overhaul local disclosure rules.

The Refinitiv data showed consumer discretionary, industrials and technology companies in the United States had the highest ESG scores last year while those in the mining sector lagged. 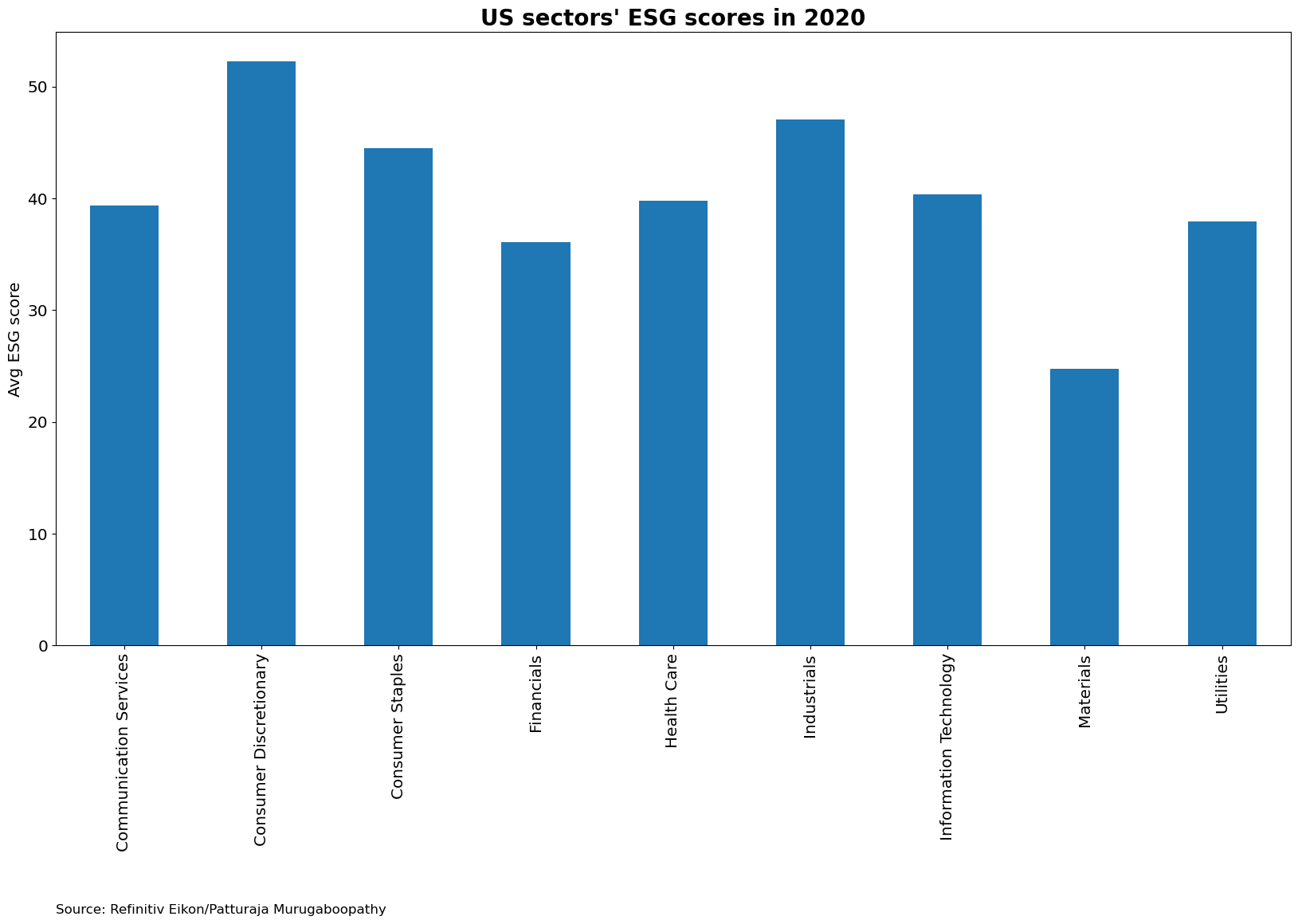 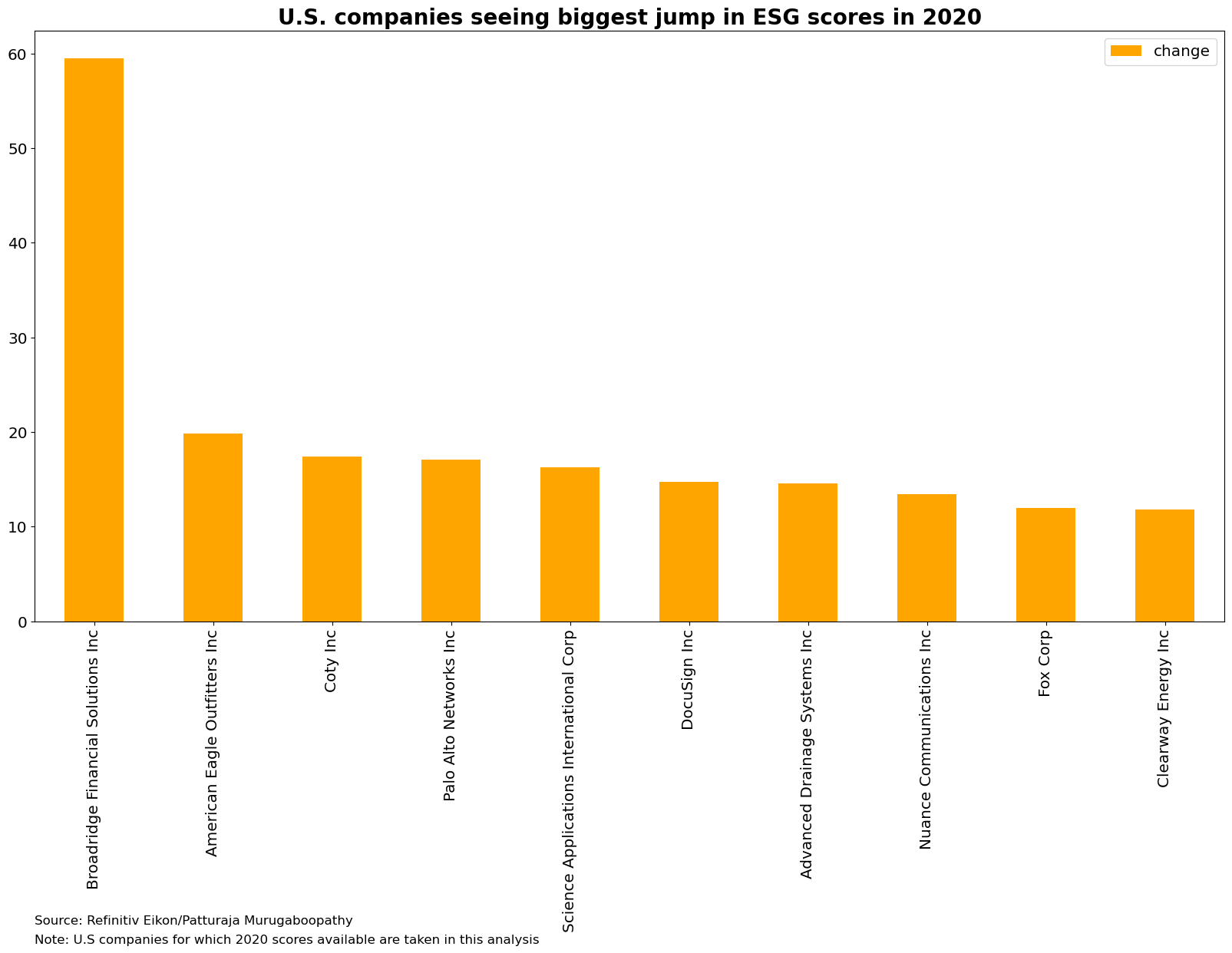 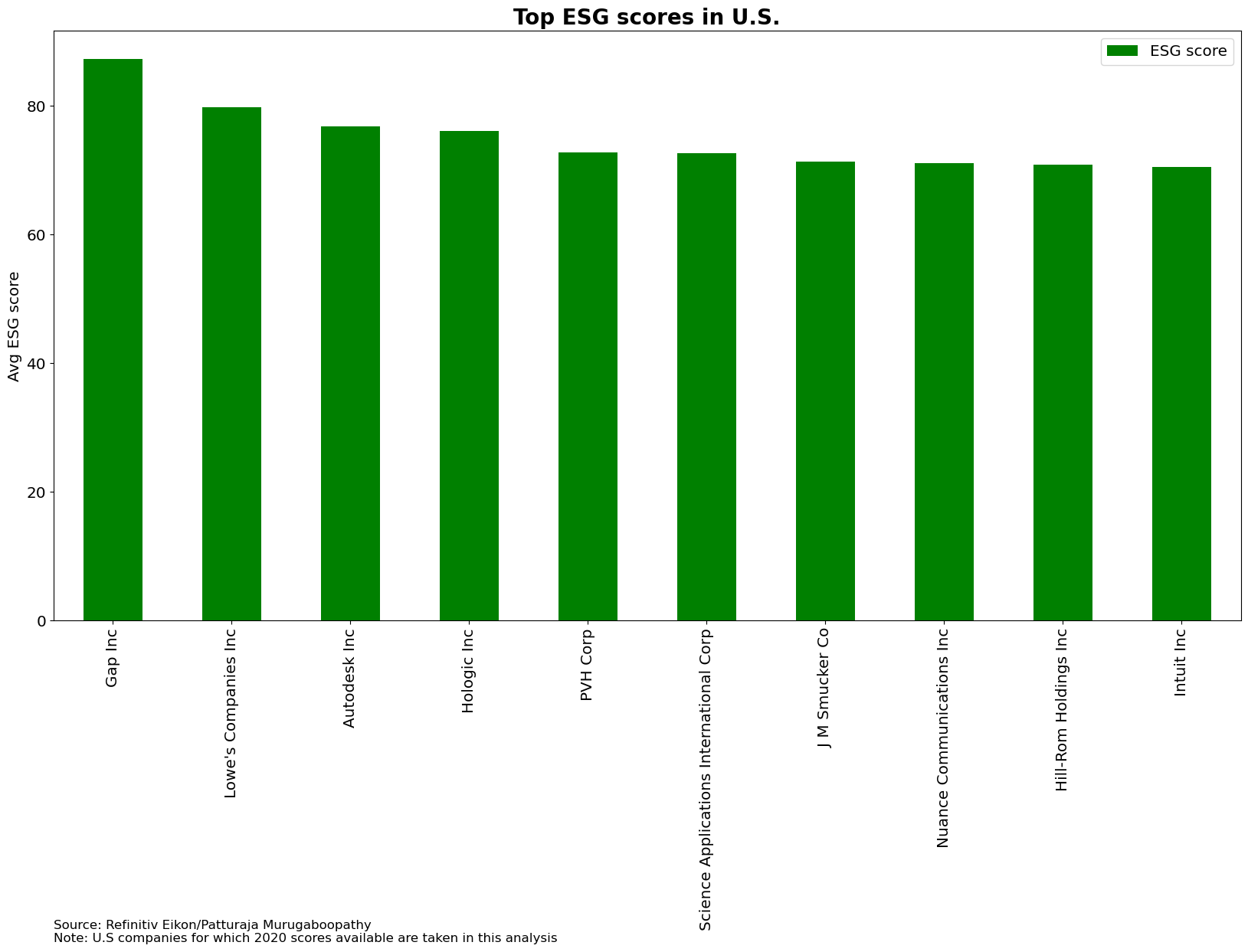 U.S. companies' average score lagged their European peers, whose average was 58 at the end of last year, based on Refinitiv data.

"Europe was the pioneer on ESG, so you have more established reporting and adherence to ESG principles," said Brendan Erne, director of portfolio management at Personal Capital. "With demand growing so fast, U.S. companies will eventually have no choice but to better disclose and manage ESG issues if they want to compete for the same pool of capital."

"And I think even more companies will jump on the bandwagon when they realise they can actually improve financial results through better management of ESG issues," he said.

The U.S. Securities and Exchange Commission in March said it would seek input on what companies might report on climate factors in a sign of the growing importance of these issues for investors. read more 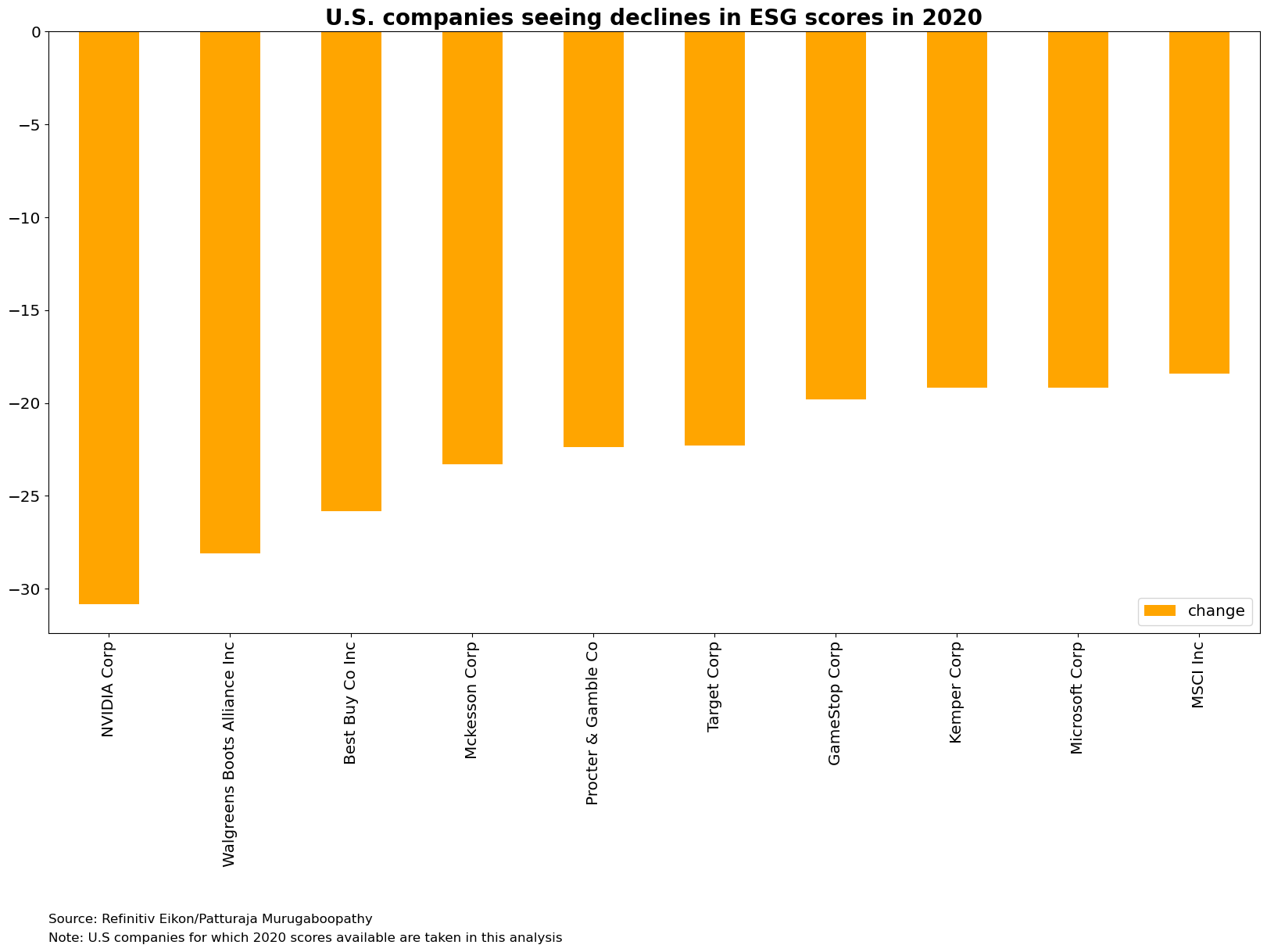 The U.S. waste-management industry has become a darling of environmentally minded investors for its work in recycling trash and harvesting gases from landfills as an alternative fuel.